Photos; See How These Youngsters Are Risking Their Lives By Diving From Rail Bridge Into A Canal

A group of young daredevils have been seen risking death by carrying out a dangerous and life-threatening stunt in India. A series of shocking and heart-stopping photographs have captured the moment the teenagers line up along a railway bridge before leaping into a canal as a fast-moving train approaches. 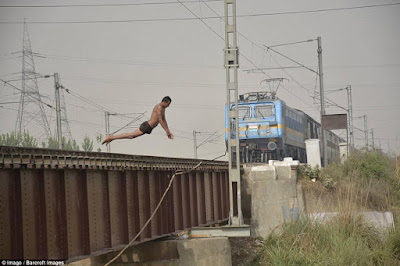 And this is not the first time the stunt has been performed above the Upper Ganga Canal in Ghaziabad, India.

Local police previously promised to deploy extra patrols to deal with the youngsters carrying out the stunt and posting footage of it online.

The boys are seen waiting on the bridge in Ghaziabad district before leaping one-by-one into the Upper Ganga Canal. Police said extra patrols have been deployed to stop other youths from playing on the train tracks and filming footage to post online.

But incidents like these are not uncommon, and many people become victim to grievous accidents when they stumble while performing the stunts. 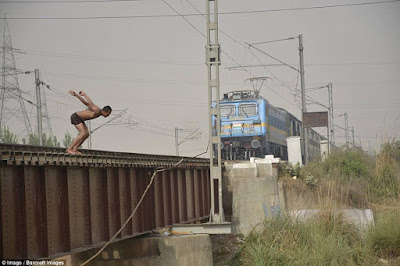 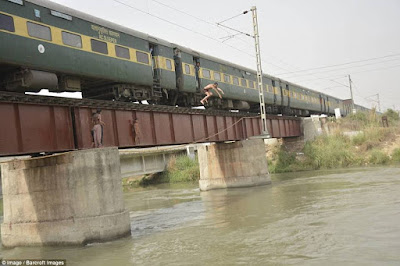 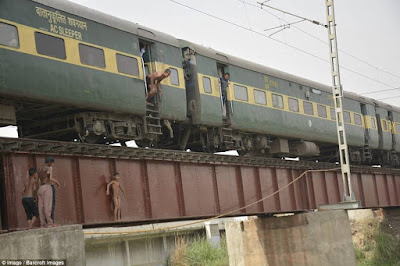 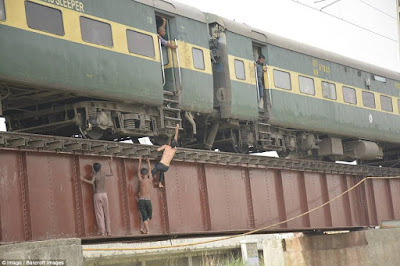 Photos; See How These Youngsters Are Risking Their Lives By Diving From Rail Bridge Into A Canal added by Gistmaster on April 25, 2017
View all posts by Gistmaster →

Ease of doing business: Saraki charges technical committee on CAMA, ISA
Agbarakwe, 2 Other Nigerians Win Crans Montana Award
NLC threatens strike if petrol scarcity persists into New Year – Labour
5 safety tips for traveling long distances
If you take a bullet for me, I will take a bullet for you – Governor Wike