NOLLYWOOD ACTRESS,MERCY JOHNSON TELLS GISTMASTER ‘I JUST SUFFERED AN HEARTBREAK, I AM NOT PREPARED FOR ANOTHER ONE” 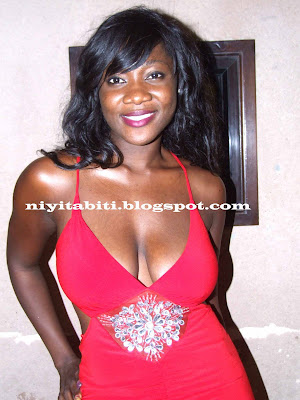 Nigerian actress, Mercy Johnson has told www.niyitabiti.blogspot.com on Wednesday 17 December 2008 that she is not ready for a relationship at the moment because she just got out of one that left her weeping.
In the words of the sexy actress, “I am not seeing any body at the moment. My Ideal man is just somebody nice. But for me, dating is out of the line. I just got out of one. We broke up. Specifically, he was living a false life. He was married and I didn’t know because he lives abroad”
The Kogi state born actress stormed the Future Award nominee party held at Swe Bar, Onikan,Lagos in an all revealing dress that got eyes popping out of it sockets. She came with a smart looking management staff of Guinness Nigeria Plc (name withheld) but denied having an amorous relationship with him. She insisted that they both met that afternoon at a Guinness event and they decided to come to Swe Bar together.
Away from the romance, the controversial actress told gistmaster that she is determined to get to the zenith of her career no matter. “We don’t have a box of fame here where you just place your hand and get it done. I honestly want to carve a niche for myself. I want to be known for being in my own world of creativity” she said with so much excitement.
When it comes to the issue of glamour, the sultry Nollywood actress confessed that she is ready to go all the away.
According to Mercy, fans expect you to be glamorous all the time. No matter the situation. Even if it is burial, people want to see you representing glamour.
For someone who has faced some bad press in the past, Mercy told gistmaster that she has realized that it is a price one has to pay for stardom.
“Usually, the real me, I usually cry, like what somebody wrote about me and some other day, I don’t know. I cry but after time I realize that it is price one has to pay for stardom. People are worried about what you wear, what you eat, who you date” she said.
Concerning her plans for next year, Mercy said she want to be closer to God. She also said she would be unveiling her orphanage kids.
She told gistmaster ”We have this orphanage where I am the sole sponsor. It is called, House of Mercy. So, we are thinking of having a TV show where we bring out the kids. Instead of celebrities going to club where they would spend about 800,000 Naira on drinks, let’s spend twenty something thousand Naira, on the kids to have a better life. It is around my area in Badagry. It comprises of not just little kids but adults.

NOLLYWOOD ACTRESS,MERCY JOHNSON TELLS GISTMASTER ‘I JUST SUFFERED AN HEARTBREAK, I AM NOT PREPARED FOR ANOTHER ONE” added by gistmaster on December 19, 2008
View all posts by gistmaster → 25 Responses to "NOLLYWOOD ACTRESS,MERCY JOHNSON TELLS GISTMASTER ‘I JUST SUFFERED AN HEARTBREAK, I AM NOT PREPARED FOR ANOTHER ONE”"