Thank you all to those who have been contacting us on the 2009 edition of our best dressed star. Loads and loads of suggestions have been coming our way and i must state that we on this side are more than happy that the world all over, our stars are appreciated. Last year’s edition was fabulous.Omotola Jolade-Ekehinde, Rita Dominic,Genevieve Nnaji,Stephanie Okereke and Ini Edo were some of the names mentioned last year. People did not only vote, they als 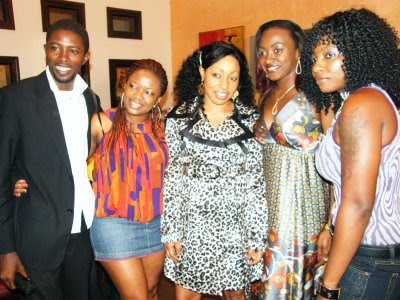 o commented on why they would choose a particular star as the winner.
About 40 journalists, fashion designers and celebrities were also asked to go through a secret balot on their choice of best dressed actress.Rita Dominic emerged as the winner.GISTMASTER had a grand reception for her at Swe Bar!
Many thanks to our dear friend,Tosyn Bucknor-the small but mighty presenter,writer,singer,blogger etc…Tosyn,you are too much…oti po ju!Many thanks to Swe Bar.Ajibola Ayana Olubiyi,Otunba Olakunrin and others- you are wonderful,Tara Fela Durotoye,we love you…thanks for the support. I must never forget KU, a fan of this blog in America who sent some good stuff to be given to the winner. She brought the ‘you can do spirit’ into the Best dressed award by fufilling the promise she made to me via email. When I look back at the email, I just laugh.In her first email, she said “Niyi, i am going to send you some gifts for the winner. Send me your address.Don’t think this is a kind of 419 or something…”
We sincerely thank the Nigerian press for their contributions. Encomium, Punch Newspapers, Champion, City People, First Weekly, News of the People, Global Excellence, The Sun Newspapers, The Nation, Vanguard Newspapers, Top Celebrities,Werunthings.com, Nicholas Anukanti of Style TV, Genevieve Magazine,Quest Television, Showtime Africa (Tee A baba, you are too much), Galaxy Television and others too numerous to mention.Ms. Kemi Otegbade of Heartlink,thanks for always being there. Mr.Kunle Bakare-publisher of Encomium-i call him the professor of celebrity journalism.Mr.KB!Thanks for all the workshops.We use to complain about those daily meetings but now it works,My oga, Mr.Azuh Arinze, editor of Encomium-I can’t thank you enough.Tayo Odusanya, Ayeni Adekunle,Nonye Iwuagwu,Amadi Ogbonaya,Victor Akande, Godwin Onyemachi,Patience… and finally, I thank my wife,TEE for the support,Uzor Ngoladi, Seun Oloketuyi,Stella Dimoko Korkos, Bayo Adetu.I must not forget Gbenga Adeyinka, the comedian of the Federal Republic.And to all readers, I thank you all!
Bellanaija, Linda Ikeji,Boobsista, and all of you that supported us through your blogs and other means.
This year, we are also seeking your your love as partner in progress.WE are still on the drawing board and would soon be taking off. This year, we would be launching the best dressed campaign in other countries of the world and the winner would be hosted by fans in other parts of the world.Lets go, if you have any idea or support pls text, call , email…!
This year, the winner would not only face the largest convergence of celebritiy photographers, it would be one day of ‘Hollywood’ celebrity treat.
soon we would announce the sponsors of this year’s edition.

Photo-Niyi Tabiti,Ajibola of SWE,Rita Dominic,Kate Henshaw and Anita Joseph at the reception for Rita as BEST DRESSED ACTRESS last year organised by Gistmaster

One Response to "WHO WINS GISTMASTER BEST DRESSED CELEBRITY IN 2009"