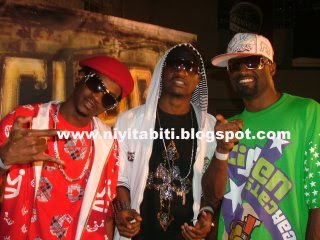 By Niyi Tabiti
Following their disagreement and what close sources regarded as rudeness on the part of Paul and Peter Okoye of the Psquare fame, the owner of their present residence insists they must vacate the residence or face the full wrath of the law. More worrisome was the fact that Jude, the elder brother of the singing duo was alleged to have also insulted the businessman.
Contrary to speculations that the duo of Peter and Paul Okoye of Psquare fame bought the house in Omole Estate, the Landlord has come out to say that it is a rented apartment. They paid 5.1 million Naira for three years but they allegedly went against the tenancy agreement.
The Landlord who has already filed a case against them in court, said he was shocked when he found out that they have broken down a wall in the house to make way for a studio without his knowledge. When he took it up with the twins, he alleged they insulted him so much, using so many unprintable names.
At the moment,http://www.niyitabiti.blogspot.com we gathered that the Landlord as change his mind over having the singers leave his home without much delay. “If they have money as much as they claim let them go and build their own house in choice areas like Omole or Ajah instead of insulting a man who has done so well for himself.If not,let them go and look for land in Lagos extension (places in Ogun State that is close to Lagos) such as mowe,ofada,Ibafo or Magboro” a source close to the landlord revealed to www.niyitabiti.blogspot.com this afternoon.

8 thoughts on “LANDORD INSISTS “PSQUARE MUST LEAVE MY HOUSE””