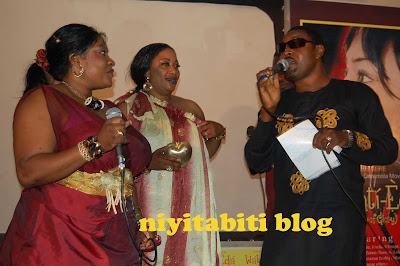 The first lady of Ondo State, Mrs.Mimiko and other important personalities graced the occasion of ‘Wakati Eda’, a Yoruba movie produced by cross over actress and producer, Foluke Daramola-Sobowale in Lagos. The banquet hall of Sheraton Hotel and Towers, Ikeja, was packed full of movie enthusiasts, producers, movie practitioners and 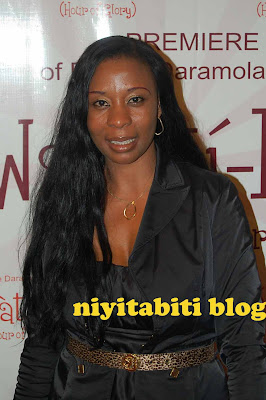 well wishers. Bonsue fuji creator, Adewale Ayuba a.k.a Mr.Johnson also thrilled the guests.
The special guest of Honour, Mrs. Mimiko was full of praises for the talented actress. She disclosed that when the actress came calling on Governor Olusegun Mimiko (her husband) and herself, they were moved by the story line and what they considered positive changes the movie would make in the lives of the people when finally released.
It was excitement all the way as the trio of the Femi Branch, Saheed Balogun and Stella Damasus- Nzeribe anchored the event. The short pre 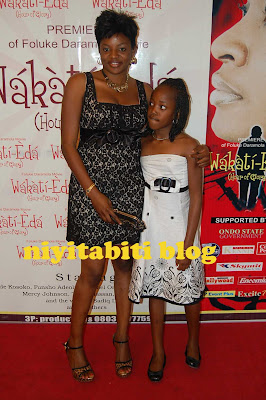 view of the mov 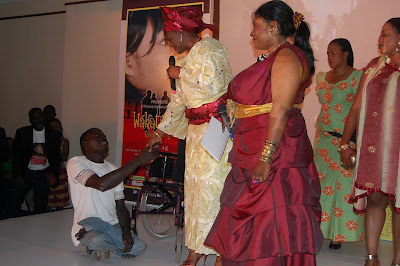 ie as the title implies, emphasize the rule of perseverance because one day there would be breakthrough.
When it was donation time, Mrs.Mimiko (who came to the event alongside her daughter and few aides) said that they would make donation of an undisclosed amount. The same term applies to the representative of Mrs.Toyin Saraki, First Lady of Kwara State.
The high point of the ceremony, however, was when Foluke donated a wheel chair to a physically challenged man popularly known as Abacha. http://www.niyitabiti.blogspot.com/ learnt, Foluke was motivated to make that token donation because the young man controls help solve traffic logjams despite his disabilities. “He ensures a free flow of traffic despite physical challenge. I have been seeing Abacha for sometime and I decided to donate the wheel cha 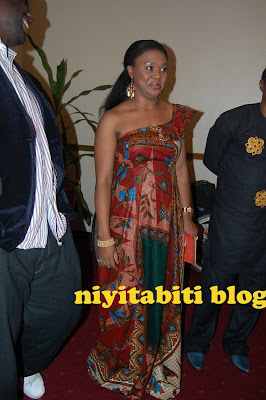 ir in my own little way and to encourage others to o same” she said in an emotion laden voice.
Don’t let us forget to tell you that the red carpet was dotted with ‘G’ class Mercedes Benz cars (From Tayo Ayeni’s Skymit Motors) dropping people at the entrance into the hall. After parking their cars, the guests were then chauffer driven (by a driver already waiting by the side) to the entrance.

STAR ACTRESS GENEVIEVE NNAJI SPEAKS TO CNN ON BURSTING OUT!
OMOTOLA LATEST WORK- 'TIES THAT BIND' ON THE SCREEN SOON
I WAS NOT RAPED AND I HAVE NO FIBROID- FUNKE AKINDELE INSISTS
BHARTI AIRTEL, MTV BASE PRESS LAUNCH FOR MAMA 2010
CHELSEA CLINTON’s WEDDING TO COST $5MILLION PLUS OTHER ENTERTAINMENT STORIES