The TENANT™: International Award winning Movie by Nigerians set to premiere in Lagos. 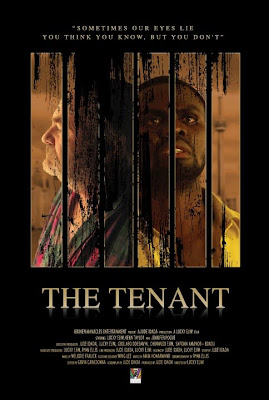 Today, Broken Manacles Entertainment, announced the forthcoming premiere of their multiple award winning movie called: The TENANT™. The movie which was also written, produced, and directed by Jude Idada and Lucky Ejim, two Nigerian emigrants in Canada was shot at various locations in Canada and Nigeria with Dare ‘BabaDee’ Fasasi as co-director.
Faced with the onerous challenge of breaking into Hollywood, the duo of Lucky Ejim, and Jude Idada founded the film production company called Broken Manacles Entertainment Inc.
The movie has already won international accolades that include:
Audience Choice Award, Best Feature Film–(Hollywood Black Film Festival2009), Beverly Hills, California;
Best Feature Film – (Moving Image Film festival2008), Toronto Canada.
The movie billed to premiere in Lagos sometime in October, 2009 at the cinemas tells the tale of the average African emigrant in search of a better future for himself and his family: Obinna, a Nigerian refugee in Canada, faces deportation in 30 days. When all hope seems lost, a chance confrontation with Timothy, his terminally ill landlord, provides him an opportunity to remain in the country. Timothy who is a former immigration officer makes him a deal; he will intervene in his pending deportation if Obinna finds his estranged daughter Nicole and convinces her to see him one last time before he dies. With the clock ticking, Obinna fights to save his dreams, in the course of which he stumbles on a discovery that will shake the very foundations of his beliefs.
So far the movie has been screened at various film festivals in the United States, Canada and the United Kingdom. In the words of the movie director Lucky Ejim: “…Some of the ideas that emanated from our research was the pain associated with the need to survive, to love and to forgive, but these words alone wasn’t enough to make an interesting film so we decided to quantify pain…” Following the screening in Canada, some of the guests had this to say:
“…. This film makes Nigeria proud. Great storytelling, Great acting, Great Directing, There should be a part two” – His Excellency, Professor Iyorwuese Hager (High Commissioner of Nigeria to Canada);
“…. I loved this film. As a successful writer, I couldn’t even fathom the plot line, twists, reversals etc. The language was marvelous. The directing is superb. I am in awe.” – Robert Eisele Writer (The Great Debaters)
The official premiere of The TENANT™ would be preceded by a screening of the movie to the media and the online blogging community on the 16th of October, 2009. The movie trailer and additional information about the TENANT™ movie are available at: www.thetenantmovie.com.
-Press Release/gistmaster.com

The TENANT™: International Award winning Movie by Nigerians set to premiere in Lagos. added by gistmaster on August 18, 2009
View all posts by gistmaster → 6 Responses to "The TENANT™: International Award winning Movie by Nigerians set to premiere in Lagos."