AS NIGERIAN MOVIE LOVERS MOURN THE DEATH OF MOLADUN, WIFE OF BABA SUWE 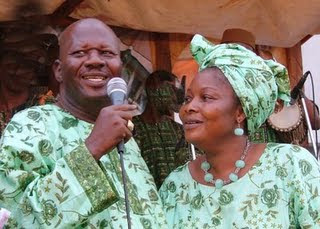 Less than a month after the sudden death of a Nigerian actress,Remi Abiola in the United States of America, the industry is already plagued with yet another devastating death.
This time,it involved Omoladun kenkelewu, an actress and wife of popular actor,Babatunde Omidina (Baba Suwe).
gistmaster.com gathered she died in her sleep between yesterday 31 August 2009 and today 1 September 2009.At the moment of putting up this report, Islamic clerics are still praying forthe repose of the remains of the talented actress.Moladun, would be remembered for her active role in the yoruba movie industry.Movie lovers would also remember her for her comic roles. May her soul rest in perfect peace.

AS NIGERIAN MOVIE LOVERS MOURN THE DEATH OF MOLADUN, WIFE OF BABA SUWE added by gistmaster on September 1, 2009
View all posts by gistmaster →

20 Responses to "AS NIGERIAN MOVIE LOVERS MOURN THE DEATH OF MOLADUN, WIFE OF BABA SUWE"