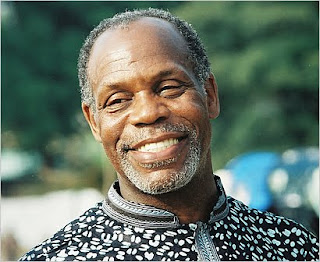 By Folake Alu/Gistmaster
Assistant News Editor
Danny Glover, the actor fondly described as Dean of African American character actors is live in Nigeria, attending the Lagos Carnival. At the time of sending this report, the American star is having fun at the Tafawa Balewa,Onikan, Lagos where he is seated alongside Governor Babatunde Raji Fashola and his predecessor in office, Asiwaju Bola Ahmed Tinubu and other important personalities.
The carnival, which coincides with the Black Heritage Festival is the first of its kind in Lagos and it is seen as a huge success by many.There is a massive turnout and good organization. Just like the Eyo Festival, which took place last year and super headed by the Fashola led government, no cases of violence has been reported except for some minor issues.
Morayo,one of the attendees of the Lagos Festival told  gistmaster at the festival ground that it is a great plus to the Lagos State tourism potentials.  “I am very happy that something like this is happening in Nigeria. I am sure that there would be a huge turn out of Nigerians in diaspora in subsequent editions. It would also attract foreigners to the country. The security management is also wonderful” she said.
At the time of filing this report, Lagos Island is still in frenzy. What a grand way of celebrating the Easter Monday.

GBENGA DANIEL TELLS OLURIN “YOUR FOREFATHERS WILL GO TO JAIL”