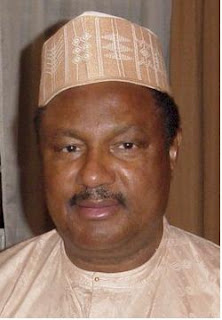 Alhaji Abubakar Rimi, a former minister of communications in Nigeria has been confirmed dead. Rimi, according to report gathered by gistmaster,  died from shock after an encounter with armed robbers in the northern part of Nigeria.
The late politician was said to be traveling  with three other persons in a Sport Utility Vehicle  when the incident happened. Though he was not shot or harassed by the robbers but we gathered they took his phones. The armed robbers were operating on the highway when they ran into them.He was so shocked that his high blood pressure shot up leading to stroke and his eventual demise last night at Aminu Kano Teaching Hospital.
Rimi, a was a former presidential aspirant and also a former governor of Kano State durning the ill fated second republic.He was 70 years old.
A staunch member of the Peoples Democratic Party, Rimi would be remembered for his opposition to President Olusegun Obasanjo’s administration,though he once served under the same government.

SWEDISH AMBASSADOR, HAFSAT ABIOLA OTHERS ON STAGE FOR 'SEVEN' NIGERIAN NURSING ASSISTANT ARRESTED IN THE US FOR FONDLING PATIENT