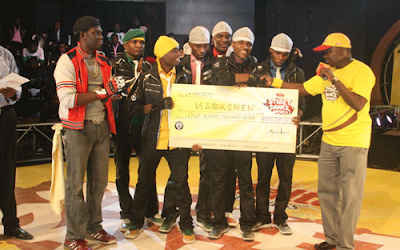 After weeks of intense contest amongst the eight street dance crews at the Malta Guinness Street Dance Competition, the race to clinch the top spot of the Malta Guinness Street Dance Africa championship can not be any competitive than what it is. At this stage of the competition, the eight crews gave a good account of themselves, putting up a highly creative and energy sapping choreographic dance steps in order to get the nod of the judges, to advance to the final of the Malta Guinness Street Dance Competition, which has changed the face of reality dance competition on TV in Nigeria. .
During the weeks at the booth camp, all the remaining  eight crews were made to go through rigorous dance routines and different challenges, where the judges scored all crews based on the best execution of the tasks given to them week in week out..
At the end of this highly creative segment of the competition, the eight crews, namely, “FLAMES INSPIRED”, “X-FELLAZ”, “EYE SIX ONE”, “SOULJA GUYZ”, “LEGACY”, “WATCH IT”, “MARKSMEN” and “SONS OF LIBERTY” exhibited exemplary dance steps, which attracted commendation from the judges
However, after collating the crews’ points by the judges, based on their decisions made  during the course of executing their weekly tasks, coupled with the votes by the audience and viewers at home through SMS, only three crews, namely “FLAMES INSPIRED”, X-FELAZ and ‘EYE SIX ONE” were able to gather enough points to get automatic qualification to participate at the National Finals, leaving “SOULJA GUYZ”, “LEGACY”,“WATCH  IT”, “MARKSMEN” and “SONS OF LIBERTY” with no choice but to battle for the only one slot left to get the opportunity of contesting at the National Final and eventually be crowned as Nigeria’s MGSDA III champion.
This round of performances made the judges witness superb movements that made Wale the chief judge to say “it’s been awesome performances”
The five embattled crews gave their best performances, the final decision rested entirely on the judges to announce the best crew among the five crews that competed keenly for the last slot to determine who will finally join the other three crews in the National Final.
After all dancing criteria were brought afore, “SOULJA GUYZ”, “WATCH IT “MARKSMEN” and “SONS OF LIBERTY” were evicted as they could not impress the judges with their performances.
“LEGACY” was adjudged the best crew among the five crews that slugged it out for the last slot to join the already confirmed three crews (FLAMES INSPIRED, X-FELLAZ, EYE SIX ONE) for the National Final. “LEGACY” performance was so impressive that it equally attracted impressive comments, from the judges. Kaffy could not but comment that “execution of movement is equally as important as thinking about it”
It is going to be a unique final as each of the four crews that will be gunning for the national final will be expected to perform with one Nigerian music entertainer.
Keep watching your favorite TV reality street dance competition; Malta Guinness Street Dance Africa III on your darling TV channels for that energetic, fun and top of the World dance experience.
Visit www.mgstreetdanceafrica.com or facebook Malta Guinness-Top of the World Goodness for more information and updates.
Malta Guinness Street Dance Africa III ……. It’s goona be 3much!

SULTAN OF SOKOTO CONDEMNS MILITARY SHOWDOWN WITH BOKO HARAM
CAREER: GET A GREEN CARD IN DIGITAL PUBLISHING AND MAKE MONEY