ON FACEBOOK, IT’s HARD KNOCK ALL THE WAY FOR SUPER EAGLES PLAYER,SANI KAITA 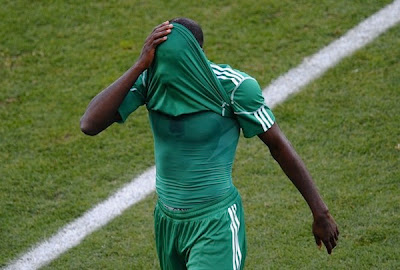 After a hard football match encounter that led to the Super Eagles of Nigeria losing to Greece at the ongoing World Cup in South Africa,it has been hard knocks all the way for Sani Kaita, one of the players who got a red card.
Burying his head in shame, the Nigerian player, marched off the field of player dejected.
Nigerian Nigeria online community wasted no time in condemning the fist of anger displayed by Kaita on the field of the play.
He was expelled for giving Greece’s defender Vasilis Torosidis a kick.
For most people on facebook, that action earned us our loss against the aggressive Greece team.After his removal, the lapses became so obvious and the Greece team. “All along, it seems as though he was silent killer of most of moves made by the Greek players but suddenly he committed an unpardonable offense and he was led sacked” said a commentator.
On Facebook, Kaita got hardnocks as most of the status read were against him.Femi Davies, a media practitioner wrote “Breaking News!….A new mental sickness has just been discovered by Neurosurgeons. It is called KAITAISIS. It affects the victim’s ability to think right or make right judgement especially when it matters most. Victims often confuse the game of soccer for a karate session. Its impact can be monumental as it can become a crisis to a nation”
Caroline Martins-Ojo, a Nigerian based in the queried why Kaita didnt control his temper just to save the nation from the embarrassment. Biodun Caston-Dada of Acada Campus magazine call it ‘a Kaita-kerous’ stupidity.

ON FACEBOOK, IT’s HARD KNOCK ALL THE WAY FOR SUPER EAGLES PLAYER,SANI
KAITA added by gistmaster on June 17, 2010
View all posts by gistmaster →