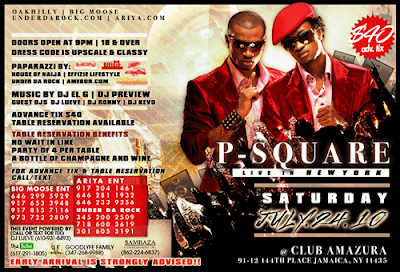 By Niyi Tabiti
For the singing duo of Peter and Paul Okoye popularly known as Psquare, July 2010 is going to be a time dedicated to their numerous fans in the United States of America. Gistmaster gathered that they have been booked for various shows in America. They have agood understanding with promoters and they are ready to thrill their fans, said a female acquaintance of Psqaure.
According to a a press statement that was sent to Gistmaster by Under Da Rock Entertainment,Psquare would be loading their fans and well wishers with new tunes from their repertoire of songs.They would be performing in New York on Saturday 24 July 2010 at Club Amazura 91-12 144th Place Jamaica,NY 11435. 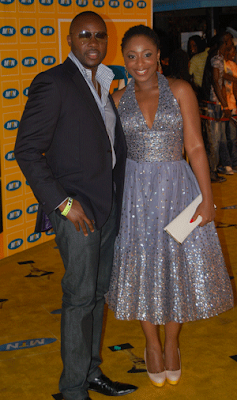 We also hear that there would be several other playing tours involving Psquare in other parts of America , especially in Maryland ,Washington DC and Florida.

OLUMIDE, DAKORE REKINDLES LOVE, CONFIRM MARRIAGE PLAN
By Niyi Tabiti
Star actress,Dakore Egbuson and her boyfriend, Olumide Akande has confirmed that marriage is indeed on the cards. Olumide who confirms this to Gistmaster durning at a function in Eko Hotel,Lagos lamented that many things have been speculated about the relationship but they both remain resolute in their bid to sustain the tempo of their love from the very first time they agreed to be together.
When pressed on when they would finally sy I do since all eyes are on them in the celebrity circuit, Olumide told Gistmaster that it would be happening soon. He assures that everything would be perfecte soon and we would be invited before December.
Olumide and Dakore’s relationship remains one of te most talked about in the Nigerian social establishment. They have been dating for years now. They have been attending functions together but it never became as pronounced until about three years ago when they attended the first edition of the Hip Hop Awards together at Planet One, Maryland ,Lagos.
Later, there there was speculation in town that the family of Akande disagreed on their son’s choice of a wife because they see her as a common actress whose moral character they could not ascertain. Olu’s absence at functions with Dakore, especially at the second edition of Hip Hop Awards in Abuja further fuelled the speculation thay were no longer together.
They came together for the third edition of the award in Lagos and Olu explained that nothing was amiss, rather, he was busy with some business engagements outside the country so couldnt make it.
Olu is the son of a Nigerian billionaire and politician, Chief Harry Akande.Some years ago the older Akande  was rated as one of Nigeria’s richest men.In one of colourful cover stories, Ovation Magazine International regarded him as the Chicago Billionaire.