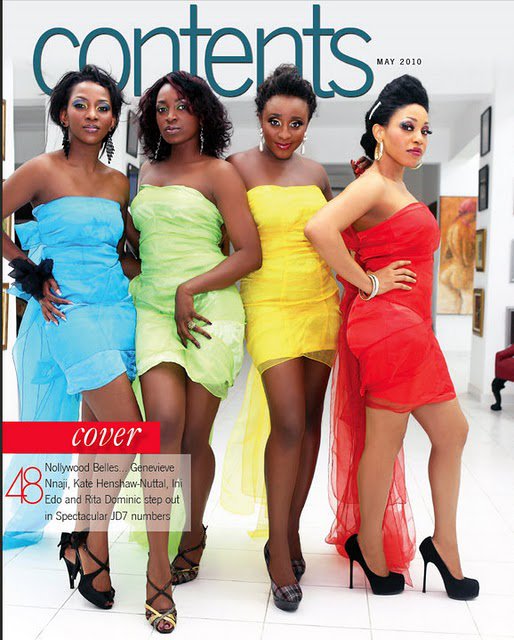 When I got this beautiful cover of Genevieve Magazine, I was very excited that our actresses are looking beyond their “make believe job”- A lot of them are giving so much to looking good.I was not surprise when I saw the names that made the cover. Genevieve Nnaji, Ini Edo, Kate Henshaw Nuttal and Rita Dominic are all epitome of glamour and beauty.
That doesnt mean that is all Nollywood can get. Younger actresses like Ebube Nwangbo, Rukky Sanda, Bisi Ibidapo-Obe and others are head turners too.
Kate Henshaw, who is the oldest amongst the actresses  gives attention to details. I remember some months back when I took a visiting German journalist to Kate Henshaw for an interview, the guy look at Kate and while guessing her age, he said Kate couldn’t have been more than 25 or 26!!!Ofcourse, Kate herself laughed. It was all a compliment anyway, though she is in her late 30s, she look ravishing.I have photographed her several times and the result has always been wonderful.
Genevieve Nnaji– She is obviously the most talked about actress in Nigeria movie industry today.Genevieve has a gift of heavenly beauty.Aside her looks, the truth must be told, Genevieve is a good actress.She interprets her role well and that is why she is the first choice of movie buyers. Many people don’t like her “I am larger than life attitude” but they can’t resist photos on the cover of  a magazine.I have quite a number of her photographs, which i took at different functions in my collections.
Ini Edo Ehigwina- She is Nigeria’s most controversial actress (though our dear friend,Mercy Johnson is dragging that position with her).Like her or hate her, she s deliciously sexy and an embodiment of beauty. She has curves and just anything she wears would bring out her figure 8.No other actress has earned so much knocks or has rumour peddled about her than the Akwa Ibom state born star. She like exotic wines and she shark them well.
I have photographed Ini Edo too at various times,both within and outside Lagos.The result has always been wondrous.Ini Edo sometimes get it wrong in her dressing (according to the verdicts of our readers).
Rita Dominic: Rita is ever stunning. Just when you think that  a star of her status should be soaked in ornament,she comes out simple.She does her calculation well and that is why she keeps winning our heart.She is smoking hot with elegance.For now, she is still the reigning queen of fashion in Nollywood based on her appearance.I have photographed Rita too and i know that she would make the cover of any beautiful magazine like this!!!

Data Okorodudu made so much sense by making these top Nollywood girls look like any “marketable” superstar that one would find in Hollywood. Lets also thank Mrs.Betty Irabor, the founder of Genevieve Magazine for raising the standard with this cover. 2 Responses to "REPORTER’s DIARY:QUEENS OF NOLLYWOOD"