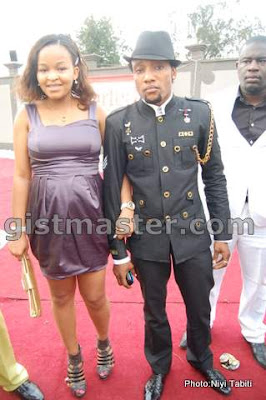 By Niyi Tabiti/news editor
Nigeria music star, Kinsley Okonkwo of KC Presh and his newly wedded wife,Cynthia Ijeoma Oduah are both expecting their first baby.Gistmaster.com saw both of them at the 2010 edition of City People magazine entertainment awards.Cynthia, who is obviously pregnant at the moment matched into the red carpet with her celebrity husband.Kingsley, the expectant father was dotting over her his wife.The couples went to the registry in March this year to seal their union.
Kingsley who shot into limelight some years ago with his music partner (Presh) after they won Star Quest music competition was romantically linked to actresses, Ebube Nwangbo,Anita Joseph and others. 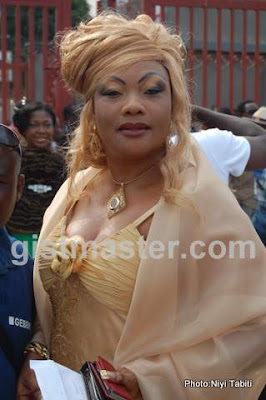 When it comes to dressing, Eucharia Anuobi is always loud and when it comes to the use of make up, she is always the ‘loudest’ in nollywood.
“I think she buys them cheap.That is why she plaster her face with so much make ups everyday” was how a celebrity described her love for make up to gistmaster.com as she stepped into the City People Entertainment Awards 2010.