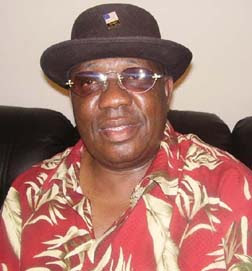 By Folake Alu/gistmaster.com
Close aides of Nigeria’s versatile Fuji musician, Alhaji Sikiru Ayinde Barrister popularly known as Barry Wonder. Rumour of the musician’s death spread wild fire all over the place, causing his fans all over the world to panic. But in a swift reaction, on Monday 30 August 2010, close aides and friend’s of Mr. Fuji as Barrister is popularly called, described the artiste’s death as unfounded, mischievous and false in its entirety.
Sources told Gistmaster.com that the star musician is recuperating in a top hospital somewhere in Europe.
“Though he has some health challenges but he is responding to treatments in Germany. I assure you that he would be back home as soon as his doctors give him the go ahead” The source told gistmaster.com
It would be recalled that the fuji music icon also returned from a trip to India in May for medical reasons. I was not beaten up- Adewale Ayuba