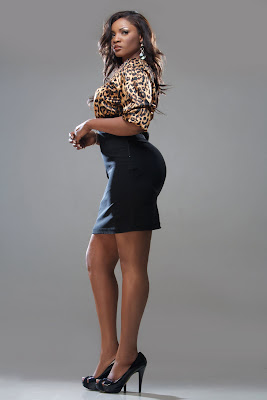 By Niyi Tabiti.News Editor
Nigeria’s ‘shakara’ queen, Omotola Jalade Ekehinde is hot and she knows this by every inch of her body mass and breath.Looking good after four kids, the actress who adores Beyonce like she is her mother’s daughter is set to release her second album.gistmaster.com gathered there would be a classy album launch at the Eko Hotel and Suites, Adetokunbo Ademola Street, Victoria-Island on 24 September 2010. On 26 September 2010 there will also be a live concert of the actress cum singer at Fantasyland, Alfred Rewane Road,Ikoyi Lagos.
The Nollywood diva is set to prove that she can do better that the first album she released sometime ago.
Omotola 30 is married to a trained pilot, Mattew Ekehinde, whom she met and married when at a early age. Together they have been able to sustain the marriage to this point. The flamboyant actress contributed to the uplifting of fashion and style in Nigeria-She had her celebrity wedding aboard a aircraft with some select Nigerian celebrities, she also one of the first set of actresses with craze for flamboyant automobiles.Now tell us Is Omotola not the Shakara queen?