IS GENEVIVE NNAJI PREGNANT? CHECK NEWS OF THE PEOPLE MAGAZINE THIS WEEK 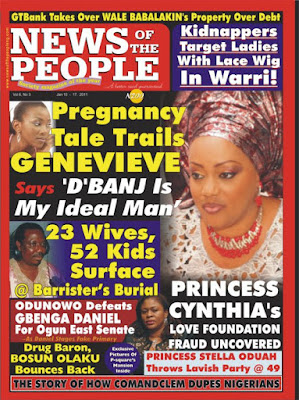 This is the cover of news of the people magazine published in Lagos Nigeria this week. One of the major stories talked about how GTBANK (GTB) took over property belonging to billionaire businessman,Wale Babalakin over his indebtedness to the bank. Babalakin who is also a senior advocate of Nigeria has several business interest including MM2 (Murtala Muhammed Airport 2),oil and gas and construction.
One of the story that would interest many people is the story of pregnancy rumour trailing star actress, Genevieve Nnaji. In recent times, there have been speculations that she was dating D’banj (Well, gistmaster have refused to believe this rumour)
The magazine also did a story on the 23 wives, 52 children that surfaced at the burial of fuji icon Alhaji Sikiru Ayinde Barrister. Remember Cynthia Andrew, the Lagos socialite who was once married to one of the sons of Alafin of Oyo,Oba Lamidi Adeyemi? The latest gist emanating from News of the People states that fraud within her Love Foundation have been uncovered.
The paper also said that Odunowo defeated Governor Gbenga Daniel in the Ogun East senatorial primary insisting that Daniel organized a fake primary election.
Drug Baron, Bosun Olaku is also said to have bounced back.

IS GENEVIVE NNAJI PREGNANT? CHECK NEWS OF THE PEOPLE MAGAZINE THIS WEEK added by gistmaster on January 10, 2011
View all posts by gistmaster → HOW TOP PRESENTER DEJI FALOPE’s WEDDING PLAN TO DIVINE LOGICO CRASHED+HOW FIANCEE ORGANISED POLICE TO BEAT HIM UP
GISTMASTER EASY DOES IT FORMULA!!!