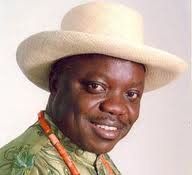 Dr. Emmanuel Uduaghan, the ousted Governor of Delta State is back at his seat. The politician who was sacked by a election appeal court was declared the winner the winner of the Delta State gubernatorial re-run election. The resident commissioner for INEC in Delta State, Dr. Gabriel Ada announced him winner yesterday evening. after declaring that he got more votes, far ahead of his other contenders.
While Uduaghan polled 275,253, his closest rival, Chief Great Ogboru of Democratic Peoples Party  got  138,244 . In fact one of the contenders, Ovie Omo- Agege only got 7,481 of the votes.

NIGERIAN NURSING ASSISTANT ARRESTED IN THE US FOR FONDLING PATIENT
HIGH SOCIETY WOMAN,CYNTHIA ANDREW CELEBRATES 40TH. DETAILS OF THE NOV. 21 PARTY
REPORTER's DIARY:STYLE PEOPLE…LETS DO IT AGAIN IN 2011