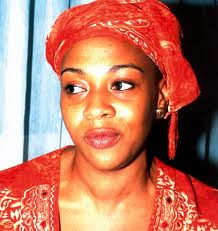 Pretty Senator and daughter of second republic senate president, Gbemi Saraki have raised alarm through her party ACPN in Kwara State that the Peoples Democratic party being led by her brother, Governor Bukola Saraki in the state is planning a massive distribution of fake nude photographs of her by all means. Gbemi Saraki, it would be recalled that Gbemi left the PDP in Kwara State with her father and their supporters when her brother (who is the incumbent governor of the state) attacked her dream of becoming the next governor of the state.
Gbemi also claimed that some people are being mobilized to protest over a woman’s ambition of becoming the governor of a religious state like Kwara.Can a brother circulate his own sister’s nude photos just to truncate her political ambition?

GBEMI SARAKI ALLEGES PLAN BY HER BROTHER’s PARTY TO CIRCULATE HER NUDE PHOTOS added by gistmaster on March 31, 2011
View all posts by gistmaster →