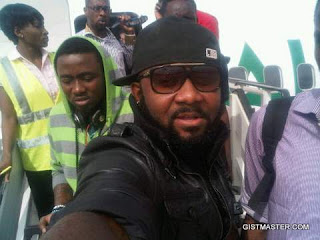 NOKIA has been accused by a Nigerian musician, 2shortz of copyrights infringement. The musician, who is hails from the  Eastern Parts of Nigeria has also dragged the mobile phone company before a Lagos High Court over what he described as a violation of his intellectual property by the mobile phone company.
In his statement of claims, 2shortz said  NOKIA used three of his songs as default ring tones for NOKIA X3 without getting approval and sealing a contract with him. He considered it as illegal.
He is therefore seeking damages in form of monetary compensation to the tune of N5 billion.
While Brendan Rilley, lawyer for NOKIA is saying that they actually got the deal through Orchard, a record label last year, 2shortz said nothing can be farther from the truth.2shortz reiterated that only Umunnamu his record label has the legal rights to enter into any contract with company or individual regarding his songs.
Gistmaster gathered that some people are not in happy that Nokia can do such a thing to a musician. A furious musician told gistmaster.com on phone that it is quite absurd and unthinkable that Nokia can commit such a blunder.
Sources however told gistmaster.com that it may not the fault of top officials of Nokia. They said they were sure some people who were supposed to broker the deal might have played a fast one by going through the back door.
James Rutherfoord, Nokia’s General Manager, West Africa could not be reached for comments on the issue. Nigerian musicians in the past have been at loggerheads with telecoms company over the way that their intellectual property have been used without gains. It took some efforts and campaigns by leading artists before the case was resolved in the past.

NIGERIA MUSICIAN DRAGS NOKIA TO COURT OVER COPYRIGHTS INFRINGEMENT added by gistmaster on June 1, 2011
View all posts by gistmaster →