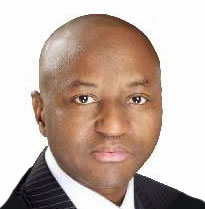 Mr. Tayo Aderinokun, the cerebral Group Managing Director of GTBank is dead. The 57 years old banker died in London today. He was ill for sometime and was on sick leave when the unfortunate incident occurred.
Gistmaster.com confirmed the news at the bank headquarters today.
Last month, Segun Agbaje was appointed acting MD of the bank. Aderinokun co-founded Guaranty Trust BANK (now GTBANK) with Fola Adeola, another astute banker turned politician. The bank is regarded as one of the fastest growing in Nigeria.
Last month staff and friends of GTBANK used his last birthday to pray for their beloved friend and boss.
A press statement forwarded to gistmaster.com reads
“With a deep sense of loss, but with gratitude to the Almighty God, we write to notify you of the passing on to eternal glory of our dearly beloved Managing Director/Chief Executive Officer, Mr. Tayo Aderinokun.
Mr. Aderinokun who had been on Medical Leave, passed on this afternoon, Tuesday, June 14, 2011, in the United Kingdom.Mr. Aderinokun co-founded Guaranty Trust Bank Plc in 1990 and served as Deputy Managing Director for 12 years between 1990 and 2002, after which he became the Managing Director, a position he held until his passing.During his time as Managing Director, the Bank witnessed tremendous progress and growth and had emerged over the years as an industry leader, pacesetter of unique and progressive innovations in the banking industry. The Bank is now easily acknowledged and recognised as one of the most profitable and professionally managed corporate institutions in Nigeria and has been the recipient of several awards for exemplary corporate governance practices and excellent customer service.In addition, Mr. Aderinokun was also the recipient of numerous awards as an acknowledgment of his sterling leadership role in the achievements of the Bank. The awards include ‘Banker of the Year’ at the inaugural ThisDay Awards in 2006, Most Respected CEO by PricewaterhouseCoopers in 2008 and ‘African Banker of the Year’ by the “African Banker” magazine in September 2009. He was also a recipient of the National Award of Member of the Federal Republic of Nigeria (MFR) and a Fellow of the Chartered Institute of Bankers, Nigeria (FCIB).We wish to inform you that the operations of the Bank continue to run smoothly under the leadership of the Acting Managing Director, Mr. Segun Agbaje who was Deputy Managing Director from 2002 till April 20, 2011, when he was appointed as Acting Managing Director of the Bank.