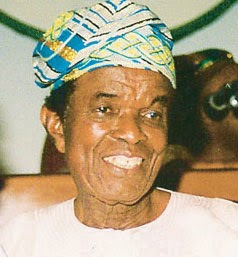 Some years ago,I was at the launch of Freedom Jail,a book written by Ayo Opadokun, a former NADECO chieftain. One of the special guests was the late Pa Abraham Adesanya (1922-2008), a lawyer,politician and activist who contributed to the achievement of Nigeria’s return to democracy.
I will never forget the story Pa Adesanya told everyone at the event. He told us the story of a man who left Kano or Kaduna and was heading to Lagos. After travelling several miles, he got to Ilorin, he asked “Are we not in Lagos yet?”, they told him…we will soon get there, when he got to

Ogbomosho he asked the same question, and they gave him the same answer.

The man was impatient and upset that he was not there yet, but continued the journey.He finally got to Ibadan, he asked the same question, they told him, he will soon get to Lagos. He was upset but managed to get to Ogeree or Sagamu, he asked them “Are we not there yet?”, they told him we will soon get there.
He was no longer patient. He decided to return to Kaduna when he got to Ogeree/Sagamu where you have the old toll gate.He was tired. He said, he would embark on the journey another day!
Ogeere/Sagamu is just about 30 minutes drive to Lagos…He was face to face to accomplish his mission but turned back at the last minute.He went back to Kaduna thinking it would be a much shorter distance compared to when he would get to Lagos from Ogeree.
You are almost there, don’t shut down.Stop Procrastination, move on.
By Niyi Tabiti
Lagos-Nigeria