Senator Enyinnaya Abaribe on Friday signed the bail bond of the leader of the Indigenous People of Biafra (IPOB), Nnamdi Kanu. A Federal High Court sitting in Abuja on Tuesday granted Kanu’s bail on health grounds. 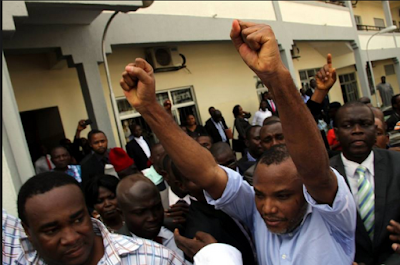 The IPOB leader was granted bail after part of the charges filed against him and three others – Chidiebere Onwudiwe, Benjamin Madubugwu and David Nwawuisi – were struck out by the court.

Justice Binta Nyako while ruling on the bail application barred Kanu from granting press interview while on bail.

She also warned the IPOB leader against participating in any rally or found in a crowd of more than 10 persons during the course of his bail.

Kanu’s lawyers had said on Thursday they are working hard to perfect his bail conditions before the week runs out.