A murderer tried to break out of jail disguised as a woman – but was caught after guards noticed he was ‘walking funny’ and ‘speaking in a man’s voice,’ it was reported Wednesday. Francisco Herrera Argueta, 55, dressed as a lady with a long skirt, blonde wig and fake breasts as he attempted to leave the maximum security jail along with other inmates’ families following visiting hours. 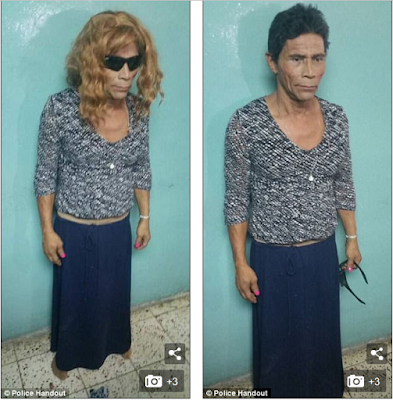 The prisoner had planned to pretend he was a female visitor to the jail, Jacinta Elvira Araujo, who had left her identity card with guards as she entered the prison in San Pedro Sula, Honduras, on Sunday afternoon.

But despite his best efforts to look like a woman complete with blusher and pink painted nails, Argueta apparently forgot to speak like one when it was his turn to pick up the identity card at the jail exit so he could leave.

Police spokesman Bayron Sauceda said officers had already noticed the woman’s ‘funny walk’ as Argueta struggled to walk on high heels, but he had still managed to pass through several security filters on his way to the exit. 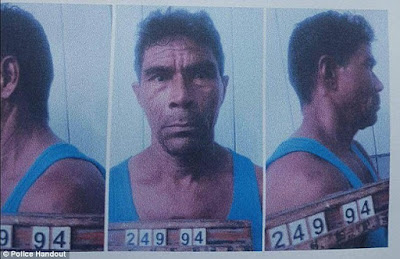 Then when a guard at the prison gate asked the apparent visitor for her identity card number she ‘spoke with a hoarse, male voice.’

Argueta was finally unmasked after the guard asked the woman to remove her dark glasses so he could verify her identity photo and ‘the make-up couldn’t hide the fact that he was a man,’ according to the spokesman.

Argueta, a gang leader known as Don Chico, has been at the jail since September 2015 charged with murder and firearms offences.

Prison officials said he will now be punished for his escape attempt and could be transferred to the notorious El Pozo jail in Santa Barbara, known as Honduras’ most dangerous prison.

Busted! Male Inmate Tries To Escape Prison By Dressing As A Woman. See Photos added by Gistmaster on May 10, 2017
View all posts by Gistmaster →