A blogger has been given a suspended jail sentence by a court in Russia after he posted a video of him playing the Pokemon Go video game inside a church last year. Ruslan Sokolovsky was found guilty of inciting religious hatred inside a Russian Orthodox church after he posted the video on YouTube which has attracted more than 1.9 million views. 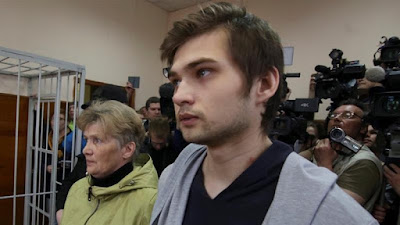 On Thursday, the court also sentenced the 22-year-old to 160 hours of compulsory community service and told him not to appear in public places.

Russian prosecutors had earlier called for a three-and-a-half year jail sentence for the blogger in a case that has drawn ire from rights activists.

Sokolovsky – dubbed a prisoner of conscience by Amnesty International – was detained and charged under controversial legislation for “inciting hatred” and “insulting the feelings of religious believers” before being put on trial.

“There are no grounds to let the defendant go unpunished,” Russian news agencies had quoted a prosecutor as saying in court.

Pokemon Go, jointly developed by Nintendo Co and Niantic Inc, generated masses of followers around the world as players use their phones to capture animated characters that appear in real locations.

End Time! Blogger Sentenced For Playing Video Game In A Church. Photo added by Gistmaster on May 12, 2017
View all posts by Gistmaster →

@vosavic got a special new year package to blow your mind! N100,000 up for grabs, and all you need to do is Be creative!
Nigerian lady set to wed her man after 8 years of friendship, 2 years of engagement & constant pressure (Photos)
Husband And Wife Married For 54 Years Die On The Same Day. Photos
Trade Fair: Bangladesh seeks strong investment relations with Nigeria
Fulani Attack; Soldiers Confiscate Over 30 Motorcycles Belonging To Herdsmen In Benue. Photos