A 49-year-old auto dealer, Tunde Olatunbosun, has been arrested by the police in Ogun State for allegedly killing a tanker driver at a carwash in Abeokuta. The suspect, who had been on the run since committing the crime penultimate Saturday, was nabbed with one pump action gun, 43 live cartridges, military camouflage uniform and different vehicle number plates. 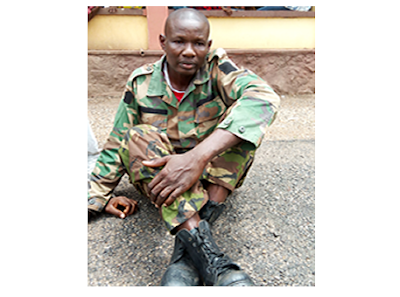 He, however, declared that his rifle was meant to scare away people, adding that he shot the deceased in error.

Olatunbosun was paraded, on Monday, alongside nine other suspected criminals by the state Commissioner of Police, Ahmed Iliyasu, at the state police headquarters in Eleweran, Abeokuta.

The father of three was arrested by operatives of the Federal Special Anti-Robbery Squad (FSARS) barely 48 hours after he reportedly shot dead a motorboy simply identified as Rasaq at a carwash in Leme area of Abeokuta.

New Telegraph learnt that the suspect had on the fateful day brought an unregistered Toyota Sienna car to the autowash centre for cleaning services when an argument ensued.

Fake Soldier Arrested For Shooting Tanker Driver To Death In Ogun State. Photo added by Gistmaster on May 8, 2017
View all posts by Gistmaster →