See What A Father Did To His 8-Year-Old Daughter For Tearing His Divorce Papers. Photo

A little girl was hung up outside her home and beaten by her own father after she tore up parents’ divorce papers. The eight-year-old victim, who has not been named, is said to have been unhappy that her parents got a divorce and threw the tantrum that led to her receiving the extremely harsh punishment. 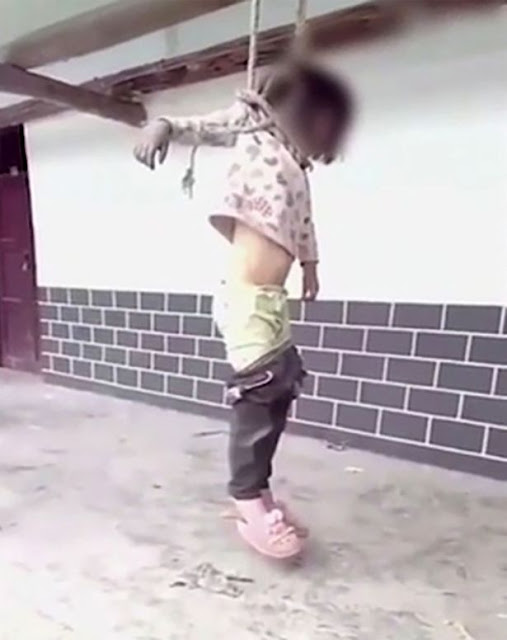 Local authorities in Guangyuan City’s Jiange County, in south-western China Sichuan Province, have since arrested the dad after he shot a short video showing the girl dangling and then sent it to his ex-wife to spite her.

The girl’s mum took the clip to the cops, and the police rescued the girl and took her to hospital.

The authorities said the girl was beaten for destroying the divorce papers, but the dad also lost his temper because she damaged furniture and broke a bottle of grain alcohol.

The child has since had a check-up and is now receiving psychological counselling to help her recover from the trauma.

Fortunately, her physical injuries were not that serious, the police said.

The mum is expected to be given custody of the girl while investigations continue into the dad’s actions, which could see him charged with child abuse and jailed for over a year on top of having his parental rights revoked.

See What A Father Did To His 8-Year-Old Daughter For Tearing His Divorce Papers. Photo added by Gistmaster on May 8, 2017
View all posts by Gistmaster →

One Response to "See What A Father Did To His 8-Year-Old Daughter For Tearing His Divorce Papers. Photo"