Donald Trump’s critics have long claimed he doesn’t know what he’s doing. The US president tweeted about his arrival at the G7 summit in Sicily… a full day after he left.

The hastily-deleted missive said: “Just arrived in Italy after having a very successful Nato meeting in Brussels. “Told other nations they must pay more, not fair to US.” 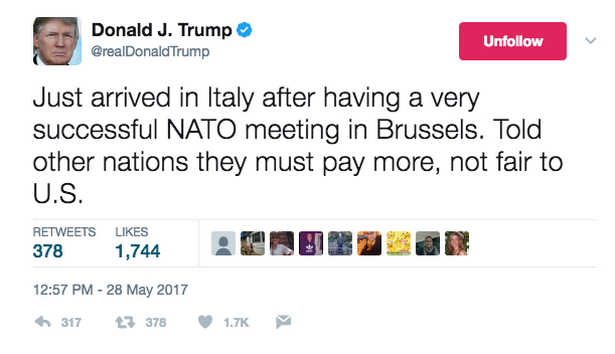 It was posted at 12.57pm on Sunday British time, around 11 hours after the President stepped back into the White House after returning from Italy.

He later replaced the tweet with the words: “Just returned from Europe. Trip was a great success for America. Hard work but big results!”

The gaffe was made all the more impressive by the fact the President’s Twitter cover photo is of the G7 summit he’s returned from. 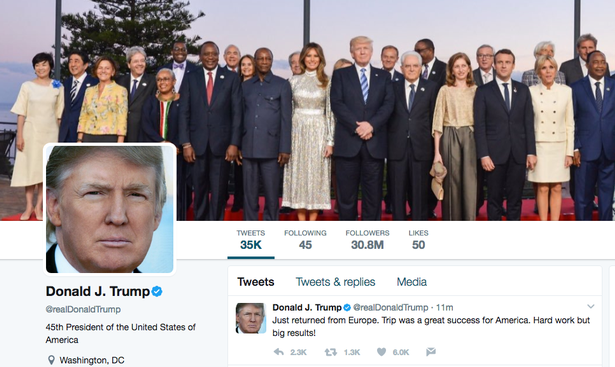 US President Donald Trump Goofs On Twitter After His Departure From Italy… added by Gistmaster on May 28, 2017
View all posts by Gistmaster →

Husband And Wife Married For 54 Years Die On The Same Day. Photos
S.Africa’s ANC elects new chief – who else is in the race?
Journalist Shares Experience After Storming Lagos Creeks In Search Of Kidnappers. Photos
CCT trial: FG tenders Saraki’s EFCC statement in evidence
Father Raises Alarm After His Daughter Was Abducted During Church Service In Lagos. Photos