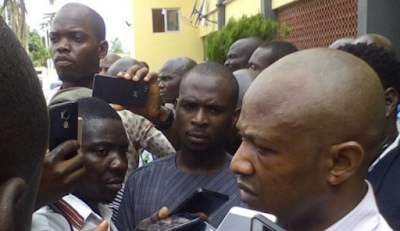 The Federal High Court in Lagos on Wednesday dismissed the objection of the police to the hearing of the N300m fundamental rights enforcement suit filed by suspected kidnap kingpin, Chukwudumeme Onwuamadike, alias Evans.

Justice Abdulaziz Anka,  dismissed police argument that the case was not ripe for hearing due to the Inspector-General of Police and the Nigeria Police Force being served with court papers in Lagos rather than in Abuja.

Justice Anka upheld the argument by Evans’ lawyer, Mr. Olukoya Ogungbeje, that by virtue of Order 5 Rule 2 of the Fundamental Rights Procedure Rules 2009, the IG and the NPF were rightly served through their agents at Alagbon in Lagos.

The court also agreed with Ogungbeje that Mr. Emmanuel Eze, who appeared for the 3rd and 4th respondents in the case, had no right to speak for the IG and the NPF, which were joined in the suit as the 1st and 2nd respondents respectively.
BT
The judge agreed that the coast was clear for the hearing of the suit on Wednesday as there was proof of service on the IG and the NPF, which was exhibited before the court.