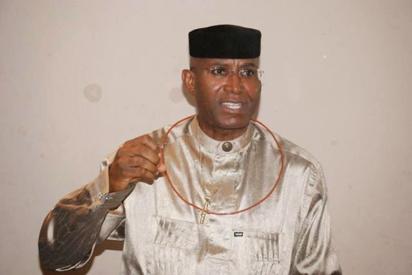 The group, whose membership are mostly commercial motorcyclists, popularly known as Okada, said their call on the Senator was for him to continue with his good works, adding that Omo-Agege was giving effective representation and socio-economic empowerment to the people of the senatorial district.

In separate interviews, Chairman, Secretary and spokesman of the group, Mr. Samuel Izobo, Mr. Desmond Owens and Mr. Otu-AJ, respectively, said they were moved by Senator Omo-Agege’s kind gesture to their members, promising to mobilise support for the Senator’s re-election in 2019.

Izobo said that they were impressed with Senator Omo-Agege empower-ment progra-mme, adding that it was the first of its kind in the state.

On his part, Owen said within the short time of the group’s formation, they had been able to mobilise all those empowered by Senator Omo-Agege across the whole of Delta Central.

P-Square will come back only if the respect is back — Peter Okoye
Declare Presidential Ambition On Or Before Jan 1, Group Tells Atiku
‘Merry Christmas’, Festive Party Hosting Etiquette
Funke Akindele is all smiles in new vacation photo
Electoral Justice in Kenya and Nigeria