The Academic Staff Union of Universities, ASUU, will tomorrow hold a crucial meeting with the Federal Government. 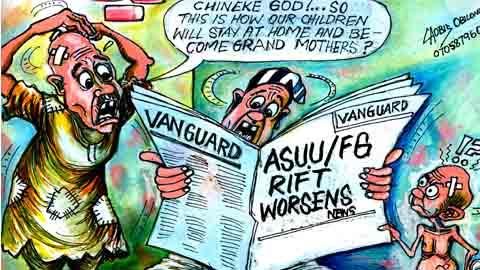 The meeting will be coming exactly a week since the lecturers refused to show up for a meeting with the government delegation, saying such meeting was “unnecessary.”

Coming at the instance of the Ministers of Labour and Education, the meeting will be attended by both ministers, Chris Ngige and Adamu Adamu respectively.

President of ASUU, Biodun Ogunyemi, who confirmed tomorrow’s meeting, said:  “We just received the notification of the meeting. Until Thursday, that is when we can say what would happen but we have been invited for the meeting.”

A National Executive Council meeting of ASUU held last week had reviewed the government’s initial offer to some of the demands of the lecturers.  At that meeting, the lecturers resolved to proceed with the strike, which commenced August 13.

According to a top ASUU official, who pleaded anonymity, the lecturers rejected the Federal Government’s offer  due to lack of “trust.”

“Lecturers were not comfortable with the Federal Government’s offer because previous promises failed.  So, it was better to solve all once and for all, so as not to be deceived again,” the source said.

The federal government had reportedly offered to pay N23 billion and a monthly payment of N1.5 billion, pending the outcome of the forensic audit being carried out by the Ministry of Finance on various universities.