Lagos- The son of former Vice President Abubakar Atiku, Aminu Atiku was yesterday remanded in transit cell by a Tinubu Magistrate’s Court in Lagos  for allegedly disobeying a court order of the court, made on October 11, ordering him to produce his son Amir Atiku.

Magistrate Kikelomo Ayeye had  on October 11, made the order over the custody of 8 year old Amir, whom he was alleged to have taken away from the custody of his estranged wife, Fatimo Bolori. 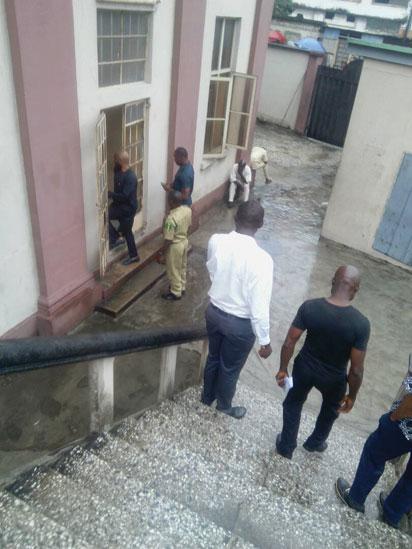 In the order which a copy which was made avaliable to Vanguard , Magistrate Ayeye had made an order of emergency evacuation and protection ordereding the respondent in the suit marked FCL/29/2017, between U. F.  Bolori Vs M. A. Abubakar, to produce one Amir Abubakar, on October 18 (Wednesday), for the hearing of the matter.

When the matter came up yesterday, for the discharge of ’emergency, evacuation /protection order made by the court, lawyer to Atiku’s son, informed the court that the parties were making plans to settle the matter out of court.

In response, Bolori’s lawyer, Nwabuzor Okoh, denied ever receiving any notification or information from the respondent to settle the matter out of court.

Consequently, Magistrate Ayeye cited Atiku for contempt, of  court order made on October 11, and ordered that he should be remanded at the  transit cell, while the case was stood down pending when he produce the boy.

However, during one of the school holidays in 2013, Aminu requested that they be released to him for a vacation abroad, after which he refused to let the kids return to their mother.

It was gathered  that he decides where,  when and how the mother visit them under heavy security.