Leading companies across the sub sectors on the Nigerian Stock Exchange, NSE, have turned in their financial performance in the first nine months of this year showing real economic recovery with high expectation for full year 2017 bumper returns. 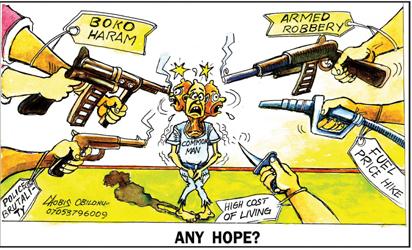 Latest reports on key economic indicators show Gross Domestic Products, GDP, started second quarter 2017 with a return to growth at 0.55 percent from recessionary zone, while inflation is on steady downtrend since early this year and Manufacturing PMI on upwards trend month-on-month since second quarter this year.

Consequently, the first batch of the companies numbering about 64, posted a cumulative gross earnings of N5.239 trillion during the period, indicating a N901 billion increase or 21.6 percent rise from N4.286 trillion recorded in the corresponding period of 2016.

The profitability rate indicated that the companies massively overshadowed the average inflationary rate of 15.98 percent during the period.

The 9-month ’17 corporate results, according to capital market operators, confirmed recent macroeconomic performance indicators, which were all in positive territories.

The growth in the companies’ fortune also confirmed the expansion in economic activities as reflected in the Central Bank of Nigeria, CBN, Purchasing Managers Index, PMI, which has been robust for six consecutive months to September, 2017. September manufacturing sector PMI expanded to 55.3 per cent, while the non-manufacturing sector composite PMI expanded for the sixth consecutive month to 55.4 per cent.

The PMI is an indicator of the economic health of the manufacturing sector. The PMI is based on five major indicators: new orders, inventory levels, production, supplier deliveries and the employment environment.

“Economic growth in Nigeria is expected to recover slightly to 0.8 percent this year after the country slipped into its first recession in more than two decades last year,” IMF said in the report.

However, the IMF, at the just concluded Annual General Meeting in Washington DC, listed policy implementation, foreign exchange market segmentation and banking system fragilities, as three major threats to sustained economic growth in Nigeria. Consequently, it warned that those threats to recovery remained elevated, and that the economy will not grow enough to reduce unemployment and poverty.

It also advised the Federal Government to pursue a policy of fiscal consolidation through higher non-oil revenues, to ensure stability in growth.

Further analysis of the 64 corporate performances for the review period showed that N186 billion was paid as tax to the federal government, indicating a N27.79 billion or 17.52 percent growth from N158.587 billion in the corresponding quarter of 2016.

Breakdown of the corporate performances by sectors showed that the banking sector outshined others in gross earnings, profitability and tax payment.

The business environment has become more conducive especially for banks to recommence import finance and other short term projects. The agric sector will also continue its impressive run since their protection by the Central Bank of Nigeria , CBN is still in force. Manufacturing has also improved due to availability of hard currency to import raw materials.

In aggregate, banks have outperformed the other sectors of the market. An efficient industry has operators of different sizes. It is our expectations that these companies will record higher returns on investment at the end of 2017.”

Managing Director/CEO, APT Securities & Funds said: “The Q3 results come with surprises especially the manufacturing companies performing better especially Dangote Group, C & I Leasing, Cadbury, Fidson, while banks show much growth in income generation but less to the bottom line as in case of Access, First Bank, GTB and the few banks that have better increase in their net profit most of them provide less or no bad loans.

With the current results released, it did not show much dominance of the banks that is why most of them did not benefit increase in the prices of stocks as in case of manufacturing companies.”

In his reaction, Moses Igbrude, spokes’ person for Independent Shareholders Association of Nigeria, ISAN, said: “ Q3 results were very impressive ; it shows that various managements have adjusted and adapted to the economy in recession and forex challenges. I pray it should translate to better returns to shareholders at the end of the year. The banking sector is an active sector that we shareholders look up to for consistency and constant payment of early dividends. Companies should be thinking about innovation and creativity to be able to attract customers and make profit.

It is about innovation and creativity. It is all about the consumers, what they want is what the market is made up. Treat the consumers with disdain soon you will be out of the market. Consumer is the king.”

In his response, Alhaji Gwadebo Olatokunbo , former National Publicity Secretary, Nigerian Shareholders Solidarity Association, said : “ The Q3 period represents the result of an economy that is getting out of recession and that of a new template being introduced.

It shows the direction of things to come, provided we remain focused and determined to grow our economy.The companies and citizens were redirecting, reinventing, rededicating, refocusing and, all things been equal, that we are getting out of the woods and ready to grow.

“We as shareholders expect good returns from our investment.

“It is not new that the banks are dominating, due to ways that our economy works. The banks have the money of both the government and the citizens as their banker; while cash/money in their vaults dictates the direction of the economy and until our values and our economy changes from cash to gold, the banks would continue to be the deciding factors on the economy.”