Reacting to his declaration as governor, Obiano also stretched out a hand of fellowship to fellow participants, even as he affirmed that the victory belonged to Ndi Anambra, who he said beat the odds to partake in an election that was largely characterised by minimal violence.

His assertions nonetheless, as the results were declared, yesterday, according to local government basis, many instances of election manipulation were cited by the local government returning officers leading to the cancellation of results in several units. The most conspicuous cases were those of over-voting, the complicity of election officers among others.

Obiano, who topped the poll in all 21 local government areas, polled a total of 234, 072 votes to beat his closest rival, Dr. Tony Nwoye of the All Progressives Congress, APC, who scored 98, 752 votes. Mr. Oseloka Obaze of the  Peoples Democratic Party, PDP,  polled 70, 293 votes to come third,  while Osita  Chidoka of the United Progressives Party, UPP, polled 7, 903 votes to come fourth.

Nollywood actor, Yul Edochie, who contested on the platform of the Democratic Peoples Congress, came out with 143 votes.

The returning officer, Professor Zana Akpadu, Vice Chancellor of the University of Calabar, said Obiano met all the requirements to be declared winner.

Reactions to the conduct of the election were, yesterday, generally calm and supportive. Dr. Nwoye, the APC candidate while congratulating Obiano, nevertheless pointed out that his supporters and agents were maimed and harassed by APGA supporters but said he left everything in the hands of God.

Dr. Nwoye said he would not go to court but that his party had the option of going to court based on the evidence before it even as he said he and his supporters would support a second term for President Buhari. 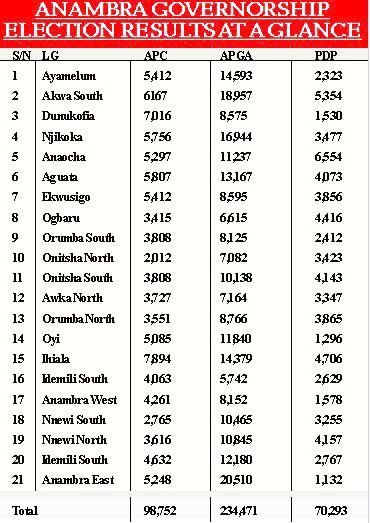 Accepting the mandate of the constituents for a second term, Obiano said yesterday: “Umu nnem, the victory we savour today belongs neither to Willie Obiano nor to our great party, APGA. No! This sweet victory belongs to Ndi Anambra!

“It belongs to the wheel barrow pushers and the Okada riders who have clearly seen in our recent political experience, a glimmer of light in the horizon. It belongs to the farmers in Ayamelum, Onono, Ogbaru, Omasi, Omor, and Ufuma who have now realized that Agriculture is the future of Nigeria.

“It belongs to the teachers and civil servants who have seen that a motivated workforce is the greatest asset of any government and have rewarded our faith in them with an overwhelming verdict at the polls.

“So, I reach out a hand of brotherhood to my fellow contestants…Oseloka, Tony, Osita, Godwin, and others whose names I cannot easily recall here. And I say to you; my brothers, we have all fought a good fight. But Anambra State is the WINNER! The interest of Anambra State is bigger than the private ambitions of anyone of us. Therefore, I pray you to join hands with me and build a better place for Ndi Anambra! Our beloved state needs our talent and our time. The time to build a better place is NOW!

“My first and deepest gratitude goes to the President of the Federal Republic of Nigeria, President Muhammadu Buhari for proving to Ndi Anambra that under his watch, democracy will sink deeper roots in the Nigerian soil. Mr. President promised us a free and fair election. Today, we can all see that he has kept his promise. Thank you so much, Mr. President!”

Among the earliest to congratulate Obiano yesterday was the Deputy President of the Senate, Senator Ike Ekweremadu who congratulated the governor and the people on a peaceful poll.

Reacting to the conduct and outcome of the election, Ekweremadu said: “I congratulate Governor Willy Obiano on his victory. It is a vote of confidence by the people of Anambra in his leadership style and capacity to deliver more dividends of democracy in the next four years.

“But, above all, I believe that the process matters more than the outcome. I commend the good people of Anambra State, INEC, security agencies, media, civil society organisations, election monitors, among numerous others for making the election peaceful.”

Ekweremadu called on Governor Obiano to reach out to his political opponents and also recruit the best hands to move Anambra State forward, irrespective of their political leanings.

Mr. Osita Okechukwu, a chieftain of APC and director-general of the Voice of Nigeria, VON on his part said Obiano’s victory was a result of President Buhari’s neutrality.

“Governor Willie Obiano benefited handsomely from President Muhammadu Buhari’s commitment to free, fair and transparent election. This is a case of democracy convert, who behaved better than old democrats. Otherwise, he couldn’t have allowed Obiano to manipulate INEC and security agencies against his party’s candidate.

“But reports reaching us say the election was free and fair.  Yes, free and fair, but one does not know how Obiano will cope with governance, as per finance, when he over bided other candidates? In our local parlance, he used all the firewood. It was more or less a cash and carry election.

“Can you imagine that the chairman of our great party, Emeka Ibe was arrested by security agents on the eve of the election. In the days of yore, a federal ruling party chairman will be parading the town with soldiers and policemen. A lot of our canvassers and sundry officials were harassed and hounded. It was the theatre of absurd.

“The Obiano camp was smart enough that it was almost the same set of University of Calabar lecturers who delivered him in 2013 that returned as Collation Officers, and Returning Officer. What a sharp coincidence of posting. The election is less than free and fair. He just benefited from Mr. President’s commitment.”

UPP candidate, Chidoka, who marshalled a loud campaign that emphasised Ibo identity, blamed his loss on money politics, saying he deliberately refused to trade money for votes as was done by some of the other candidates.

“On November 18, our people announced strongly their rejection of politicians. They traded their votes because they doubted we would truly represent their interest. While our message resonated with the people, they doubted that the political class cared about them. They voted for the highest bidder.

“When, by Thursday, a large percentage of our supporters insisted that they will not vote unless we paid, I insisted we will not pay for votes. The decision not to pay ended our good run. We accept the voters’ decision. We also heard our people, by their turnout and transactional approach, as they took sides with our Party’s considered view that the issue of justice, equity and fairness should be canvassed within Nigeria.

“In all, we hold our heads high; high because we did not lose the poll due to paucity of ideas or lack of “structure.” We lost to superior financial fire power. As Democrats, we concede to the voters’ choices. The true hallmark of democracy is the respect for the voice of the ballot as that of the majority.

“But the inner truth is that we won! We won at the most important place; in the hearts of people; our people who saw us toil and push in the arena against all odds; who saw the sincerity of our mission and gave all in support of our quest for collective good. We salute you for your support and personal sacrifices to the campaign.”

Reacting to Governor Willie Obiano’s re-election, yesterday, the Second Republic politician and lawyer, Chief Guy Ikokwu, attributed it to Obiano’s performance and the need to ensure political stability and balance in the state.

He said former Governor Peter Obi is a good man, who served the state well but his candidate, Oseloka Obaze was rejected at the polls because “Obi made the tactical mistake of being a godfather, who thought he can always impose people on the state, not on the basis of ideology or consultation with the people.”

His words: Governor Obiano deservers re-election because has done much more than many governors who are in their second terms across the country on two critical issues – security, and welfare of workers in terms of payment of their wages. Most state governments have not been able to pay the very meagre salaries of their workers. There are states that generate more revenue than Anambra State but yet are still owing salaries and pensions. At the Federal level, pensions of people who worked for 35 years are still being owed. Pensioners are being paid in Anambra. Workers are regularly paid.

“If Obiano had not been re-elected it means any other governor that comes even from Anambra North will still want eight years, two terms and his first term will be a learning process. That is the critical observance of most Anambra people. The result has nothing to do with party politics or agitation for Biafra.”

Obaze in a reaction said that the results did not reflect the will of the people.

He said: “The over voting and inconsistencies between the counted ballots and card reader data remains exceedingly worrisome.

“The uniformity of the incumbent governor wining 21 local governments is a political aberration in the context of Anambra politics.

“The election results as reported, shows that nothing matters to the Anambra electorate.   The people have spoken. They have taken a cursory long term view of what they wish for Anambra State.”

Dr. Alex Obiogbolu, who took second in the PDP governorship primaries, however, welcomed the election even as he lamented the import of the election on PDP faithful in the state.

“To my PDP family members, I understand your emotions at this moment and more so, that mine has been one of frustration and anger at oneself. We had been promised a reformed PDP, and assured severally that impunity was a thing of the past. I urge that we accept the will of the people,” he said.