Baby who spoke two weeks after birth:  Real or fake?

NO doubt the birth of a baby boy called ” Daddy Samuel” to the family of Mr. Olusola Ajayi in Akure, Ondo State capital on August 28, 2017, has greatly turned around the fortunes of the family.

The baby now known as a wonder boy,  whose parents claimed had spoken twice in two weeks after his birth and possess healing powers had not uttered any word ever since to convince critics.

He has reportedly transferred his healing spirit to his mother, who can now heal anyone no matter the spiritual problems especially anytime she carries the wonder boy on her bosom.

Vanguard reliably learned that  only the mother of the baby, Mrs. Sikiratu Ajayi, claimed the baby uttered the words “E polongo ogo mi o, e polongo ogo mi o ewe nje o” meaning that the parents should proclaim his power across the universe and that there is efficacy in herbs.

She was said to have passed the message to her husband after which the news has continued to spread like wildfire.

Mixed reactions have trailed the claim by the baby’s parents as many described it as a scam. 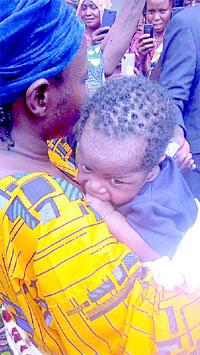 They argued that the parents were unable to produce any evidence that the baby actually spoke.

But the parents insisted that the baby not only spoke to them but possessed healing powers.

Whether the story is real or fake, Nigerians are not bothered as they troop to the residence of the Ajayi for miracles.

The wonder baby has become a household name not only in Ondo state but across the country.

Interestingly, the parents are making money on daily basis courtesy of the baby, who they described as a special gift.

His sobriquet was changed from baby Samuel to “Daddy Samuel” when his reported healing powers began to spin money for the family who could hardly afford three square meal before his arrival.

Vanguard gathered that the parents of the wonder baby collect N600 as consultation fee out of which N100 is for the sachet water provided by their landlady.

After consultation, the sachet of water is prayed upon by the mother, who claimed that his son had transferred healing powers to her.  Each visitor drops a minimum  of N5000 in a bowl kept in the consulting room for the wonder baby. The mother now carries the wonder boy in her blossom while attending to miracle seekers in the healing centre.

Surprisingly, both the low and high personalities from across the country visit the wonder boy for spiritual healing and deliverance.

The father of the wonder baby now smiles to the bank daily.

An average of 500 miracle seekers visit the two-month-old baby.  A bunch of leaves was said to have preceded his birth at around 3 am at Comprehensive Health Centre in Akure. 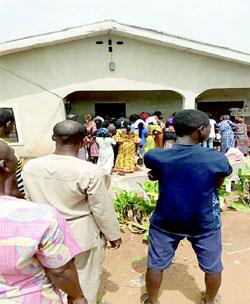 His father claimed that ”Daddy Samuel was born with a bunch of leaves bonded by a strand of hair which possesses special healing powers.

He told Vanguard that he recently relocated his family to Akure from Lagos State when fending for his family became difficult.

Olusola said that they tried all they could to abort the pregnancy because he could not cater for his wife and the three boys they had before the coming of the wonder baby.

Gave birth to a bunch of leaves

A visit to Comprehensive Health Centre in Oke ljebu area, Akure, confirmed the position of the baby’s parents.

The nurses, who took delivery of the wonder baby confirmed that the mother first gave birth to a bunch of leaves at 3 am while the baby came four hours later.

Speaking with Vanguard in confidence, one of the nurses said they were scared when the bunch of leaves was delivered by the woman and that they prayed rebuking the evil spirit that had entered into her womb.

According to the nurse, ” We had to call the matron to witness the strange delivery because it was unusual.”

Confirming this to Vanguard, the matron Mrs. Joan Mohaye said that she was woken up from her sleep, adding that by the time she rushed to the hospital she saw the bunch of leaves.

Mohaye said while the nurses and other patients were wondering and beholding the strange object, the woman again fell into labour after which the baby arrived four hours later.

She said the baby didn’t talk while at the hospital.

Vanguard reliably gathered that the parents of the wonder boy have purchased a piece of land to erect a building, where they would relocate to.

Motorcycle operators are also making money on a daily basis as they have hiked their fares from N50 per drop to N200 to the healing centre.

The father of the wonder boy said: “My wife gave birth on August 28, 2017, after a bunch of leaves came out of her womb and we were amazed after he began to talk, charging us to proclaim his coming to the world.

” The mysterious powers of Samuel, born at a Comprehensive Health Centre in Akure, became noticeable when a bunch of leaves was said to have preceded his coming out of the mother’s womb.

“Two weeks later, Samuel shocked us and his three older brothers when he instructed us to proclaim his coming to the world.”

The miracle seekers would be asked to drink the water from one of the sachets and use the other to take their bath.

The visitor would in anticipation be asked to appreciate the wonder boy with cash.

A source hinted that visitors were advised not to give less than N3000 to the wonder baby.

The amount of moeny given to the baby, Vanguard reliably gathered depended on the status of the visitor and the magnitude of the problem the visitor has.

Vanguard, however, gathered that majority of baby Samuel’s clients are women, who are seeking future partners.

Those searching for the fruits of the womb, those with issues in their marriages, and those with spiritual attacks, among others, visit the baby.

Speaking with Vanguard, Sikiratu expressed delight over the birth of the boy, saying that nurses were initially scared when she first gave birth to leaves before the real baby came out. 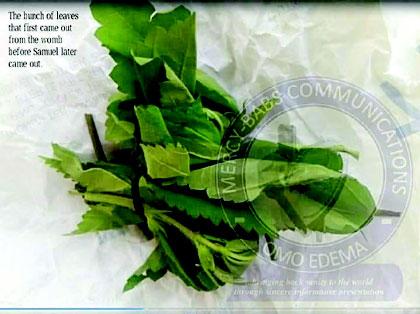 She said, “ Two weeks after he was born, I went to the next street when one of my other children suddenly came to call me that the baby was uttering some words and l rushed back home and heard the baby speaking. I was shocked when he directed that we should announce his glory to the whole world.

One of the workers in the miracle centre told Vanguard that ” the service rendered was initially free but we started collecting consultation fee of N500 per head with a view to reducing the crowd yet the people kept coming from far and near.”

He said all clients who are not fewer than 500 per day are treated equally and fairly without any preferential treatment irrespective of status or position.

Testimonies of the healing power

Meanwhile, testimonies of the healing power of the wonder baby abound.

A woman, Mrs. Abigail said her husband was healed of stroke as she poured the sachet of ‘anointed water’ on him.

“ When I came here I was given the sachet water and I took it to my husband who had stroke.  I poured the water on him when I got home and he felt very much better.  There was no need to doubt it, it is real,” she added.

A resident of the town, who identified himself as Leke said he had been to the so-called healing house, describing the development as a scam.

He told Vanguard thus:“I was there but did not believe in the story.  This is Nigeria, where people look for money anyhow. Nobody, except the mother of the baby, heard he allegedly said.”

In his reaction,  Deji of Akure, Oba Aladelusi Aladetoyinbo said he was aware of the baby’s birth, adding that he should be protected.

His Chief Press Secretary, Michael Adeyeye said:“ The palace also heard the story like every other person in the town and Kabiyesi is not trying to confirm or debunk their story. The palace was not involved and we don’t know the actual story.

“ But if the story is true, what kabiyesi is saying is that there is a need to protect the child, but as we speak, nobody has brought the baby to the palace”

The state chapter of the Christian Association of Nigeria, CAN, called for caution over the issue.

It’s Director of Planning, Research, and Strategy in the South West,  Nelson Fado was quoted as saying thus: ” The miracle baby as being referred to may be genuine to a certain extent. But let us wait and see. The parents should take proper care of the baby and stop making money with him. Natural miracles are not sold or paid for because the salvation of Christ is free.

” The baby is not God or Jesus Christ or angel, hence he must not be turned to God. God’s miracle can occur without an artificial intermediary.

” Remember there used to be  Jesu Oyinbo and Agege.

” Believers in Christ should be watchful, careful and know who they believe. CAN from time immemorial did warn Christians to hold on to their faith by not compromising it.”

However, the parents of the wonder boy  confirmed receiving gifts from various men of God ( Islamic and Christian clerics)

A Pastor of Celestial Church of Christ CCC, Shalom Parish, lkorodu, Lagos, Gabriel Oluwadamilare had described the baby as a true messenger of God.

Oluwadamilare said that circumstances that surrounded the birth of newborn baby also happened in the Bible.

He said:“I actually came to see the glory and I have no doubt about it. My stand is that what happened is true because nothing is impossible for God to do.

“I have come to seek a spiritual solution in respect of a lady who has visited several hospitals in Lagos over bone problems in the last five years.

“There is nothing fetish about the boy coming to the world with a bunch of leaves, it is just a sign from God.”.

The question being asked by observers is: why has the baby not spoken again to the hearing of other people except his parents?