The state of art in a troubled nation like Nigeria was put to test recently as notable art collectors, patrons and lovers gathered at Omenka Gallery, Ikoyi for another solo exhibition by a contemporary Nigerian artist, Ebenezer Akinola, tagged Where Do We Go from Here? 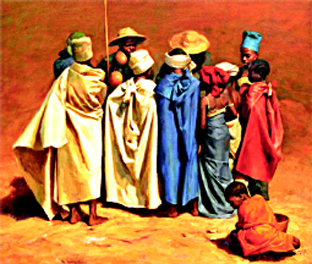 The exhibition which opened on November 12 and will end on 21 featured about 32 Portraits and figure studies that form part of the artist’s recent works. Akinola’s work bears influence from several cultures across Africa. For example, his turbans are borrowed from northern Nigeria while the wrappers are from the south. His work is also rooted deeply in a sense of community and traditional values.

One reoccurring theme in Akinola’s work is migration. Likewise, the exhibition, Where Do We Go from Here? features several paintings of people often adorned in oversized turbans and garments while bearing staffs and calabashes. These ‘wanderers’ who do not belong to any sect or religious affiliation are also seen in procession, against empty backgrounds.

According to the artist, “The empty background is for two reasons; one is technical. Sometimes it’s better to focus on the essence, the positive space; it gives better visual impact. Second and more important, is the background, which shows the “unknowingness” of the so-called journey. Questions will be asked like; where are they going? Migration is constant. Man cannot remain, he must move… I wanted to create something African without tribal sentiments— something neutral. So I make my own costumes and culture by studying different cultures and borrowing from them.”The exhibition is sponsored by AGS Moves, Taittinger and Taxify.

The University of Benin, Nigeria graduate of painting is well known for his large-scale portraits. Akinola was honoured with several awards including the Fasuyi Art Prize for Best Student (1989); Departmental Prize Best Student (1989); and a scholarship for Best Student in painting in 300 levels (1988). He has participated in significant exhibitions in Nigeria, United States and Europe, as well as completed special commissions for numerous art institutions in Nigeria.

He has received several important commissions including portraits of former leaders Nnamdi Azikiwe, Abdulsalami Abubakar and Olusegun Obasanjo, which are all displayed at the National Gallery of Art, Lagos.