Developers and promoters of the sprawling 12-floor Cornerstone Tower, a world class office development situated along Yesufu Abiodun Way, next to Four Points by Sheraton, Victoria Island, Lagos, which external block work has been completed, have set March 2018 as its delivery date.

Constructed by a team of builders led by BCL, the project which estimated cost is put at a whopping N5.9 billion, is described by its developers and promoters as ultra-modern, EDGE-certified eco-friendly building which is one of Nigeria’s most advanced developments, employing a high technical specification, security and state-of-the-art finishes. 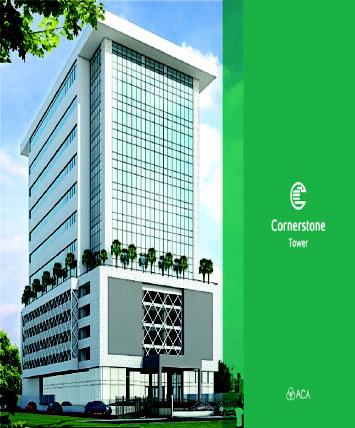 At the unveiling of the completed external works which took 80 weeks to achieve, Project Manager, CPMS Limited, one of the firms handling the project, Mr. Richard Arobadi, said the project which commenced in 2015, had a team of consultants, while the design of the edifice took eight months to put together.

Arobadi who disclosed that a team of builders led by BCL handled the construction of the multi-level structure, revealed that the completion of the external works took 80 weeks, pointing out that the building is here to challenge every building within its axis.

Speaking on behalf of Capital Alliance Nigeria, a partner in the project, Mr. Obi Nwogugu, a principal partner at Capital Alliance, who said his company is an investment company, noted that the building is in a strategic location to give investors returns on their investment.

Mr. Ganiyu Musa, Chief Executive Officer, Cornerstone Insurance Plc, developers of the project, described the project as a testament of hard work by his company, disclosing, however, that the project which was initially commenced in 2001, was abandoned due to challenges, but it was later recommenced with the current result.

He said Cornerstone Tower is set to provide a prestigious business ambience that enhances operational capabilities.

Also speaking, Roti Delano, an architect and Principal Partner, Delano Architects, who is the architect to the project, said the ground floor covers 24,000 sqm while 1000 people are expected to work in the building. He noted that the building contains between 200sqm and 1,446sqm per floor with open plan office space with raised access flooring and suspended ceiling and on-site parking slots of 203.

Pointing out that the fishings of the building are quite contemporary, he described the property as an intelligent building with modern building management and security controls.

The Chief Executive Officer, Broll Nigeria Limited, Bolaji Edu, marketing agent to the property, said the building would be unique in the market considering all the advantages it possesses.

The Managing Director, BCL Construction & Civil Engineering, the company handling the construction of the building, Roda Fadlallah, said the location is an upscale vibrant mixed use district in a fast growing business hub, with an impressive array of commercial, residential, hospitality and retail developments.

Fadlallah who gave the estimated cost of the project as N5.9 billion, said internal finishes and eventual completion of the project will be next year March.