Star Yoruba actress and politician, Funke Adesiyan literally sent the Instagram into a meltdown on Tuesday, when she posted an alluring picture of herself, showing off gaping bust cleavage and a svelte body, any plus-size beauty queen would kill for. Her boobs were so tantalizingly displayed that many of her followers could not keep mum. 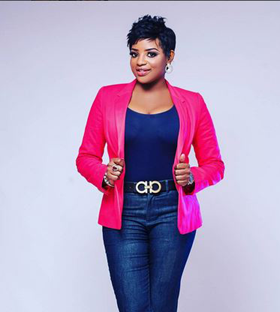 Many misread the message of the picture which she aptly tagged “body goal” by slamming her for the audacity to reveal so much, being a role model to many. But her caption ‘body goal’ was clear enough as her ultimate goal of hitting the gym is to have the kind of body she posted. For months, the actress has been hitting the gym for whatever reason and the picture may have explained it all.

While many were grinding her for the picture (used here), one follower, who calls herself Beesolalois sought her opinion on how to live with embarrassingly big boobs.

“I’m a very busty woman who is suffering seriously from lack of self esteem but whenever I see you post a picture of yourself, I wonder how you do it. Love you big time,” she wrote.

And Funke in her usual sisterly manner gave her words of encouragement.

“Dear Bisola, you have to look at yourself in the mirror and admire yourself. Many people pay tonnes of money to get those boobs God gave you for free. Package it well with the right bra and wear clothes that accentuate it. God gave you, love it and flaunt it, darling,” she advised.

Star actress, Funke Adesiyan, counsels on the gift of big boobs added by Gistmaster on November 4, 2017
View all posts by Gistmaster →

Lady Who Refused To Go On Dates Because Of Her Weight Is Now Looking For Love After Incredible Transformation…
“Silicon Valley Immersion Programme Will Open Doors For Young Nigerian Entrepreneurs in IT, Agriculture”
Super Eagles Move Up In Latest FIFA Ranking After World Cup Qualification
President Buhari Condoles Bola Tinubu Over Death Of His First Son, Jide.
Sorrow As Pretty Nigerian Lady Dies One Month After Her Wedding. Photos