When sexy UK- based Botswana singer, Lorraine Lionheart visited Nigeria, one of the very first things that caught her fancy is the popular tricycle in Lagos called ‘Keke Napep’. 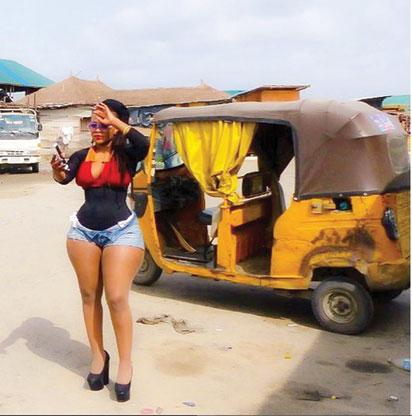 According to her, she was so fascinated by the machine that it immediately gave her inspiration for a song, which she said she wrote in 15 minutes. To her, the Keke Napep embodies sexuality which could only be expressed in a song.

“The song was written in less than 15 minutes .When sexuality is part of the inspiration, the creative juices flow smoothly. The song was inspired by naughty thoughts. ‘Keke Napep’ is sex on three wheels; I was surprised no one had written a song about it,” she said.

“When you see couples on bicycles together and motorbikes, it can trigger a sexual thought in one. You wonder what sex will be like in a ‘Keke Napep’.

I think it would make a very sexy romantic get -away ride. Sex in public is becoming a common fantasy and the thought alone can  arouse more than sexual excitement . In my case, I have to be honest, the first time I saw the Keke Napep I had peculiar thoughts and I knew the best release was to write a song about that unique experience and feeling.”

The video is rapidly gaining popularity on social media and it is set to hit music TV screens in the near future.

Talking about herself and inhibitions, the curvy singer said she’s unapologetically authentic and doesn’t offer excuses for her actions.

“I’m always genuinely me. I do not conform to any preconceived ideas and standards of how things should be. I remain truthful to myself and loyal to my authenticity. People can either like it or not. It’s not arrogance either. I just feel it would be such a loss if I had to try and be someone else.”

The hit single ‘Keke Napep’ dropped on December 2, 2017 and the diva is planning for a tour of Lagos soon.