Liverpool players jetted out to Dubai today, leaving their playmaker Philippe Coutinho behind as his reported transfer deal to Barcelona hit $192million. 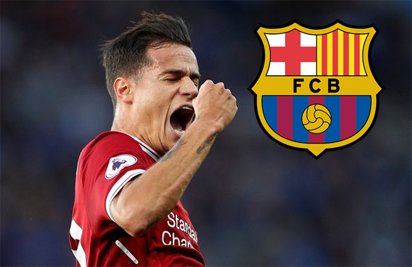 Barcelona-based Sport newspaper said Coutinho would join Barca this month on a contract for five seasons, although it said the details of the deal were still to be finalised.

“The club reached a deal in principle yesterday evening with Liverpool on the final amount of the deal,” Sport reported.

Another newspaper, Mundo Deportivo, said Liverpool were demanding 160 million euros for 25-year-old Coutinho, but that the sum would be made up of a 120 million euro transfer fee and 40 million euros of “variables”.

Coutinho stayed in Liverpool on Saturday while his teammates jetted off to Dubai for warm-weather training, fuelling speculation that he was set to leave the Premier League club.

Barcelona coach Ernesto Valverde refused to be drawn on the issue when he gave a press conference on Saturday.

“Coutinho is a great player, like other players that I am often asked about in press conferences. But I prefer to talk about the players that I already have,” Valverde said.

“When there is something new to say, the club will announce it,” he added.

Barcelona tried to sign Coutinho in the summer, but Liverpool rebuffed their £100 million bid.

His departure now would be a blow to Liverpool as the playmaker has just returned to top form after an injury-hit start to the season. He scored six goals in the last seven games of 2017 to put his side firmly in the Champions League places.

Capturing Coutinho would allow Barcelona to move on from the bitter experience of losing his Brazil teammate Neymar last summer to Qatar-backed Paris Saint-Germain for a world record 222 million euros.

Coutinho’s age is also highly attractive to Barca, whose three main stars, Lionel Messi, Luis Suarez and Andres Iniesta are all in their thirties. Iniesta, at 33, has shown signs of fatigue this season.

Reports and tweets, from AS newspaper and their reporters, said Coutinho could arrive in Barcelona later Saturday, watch Barcelona’s game against Levante at the Camp Nou on Sunday and be unveiled on Monday.

French sports daily L’Equipe reported on Saturday that Liverpool were lining up Leicester’s Riyad Mahrez to replace Coutinho, although Britain’s Press Association said the Anfield club had contacted Leicester to inform them that the reports were pure speculation.

Liverpool have also been strongly linked with Monaco forward Thomas Lemar, who Arsenal tried to sign before the season.

Coutinho played no role in Liverpool’s 2-1 victory over city rivals Everton in the FA Cup on Friday.