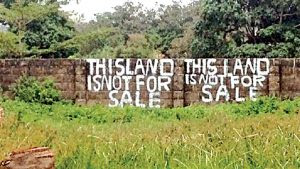 A Declaration that the unlawful invasion of the claimants’ properties with dangerous firearms, offensive weapons, malicious destruction/ demolition of the claimants’ houses, churches, factories and industries without lawful and valid court orders/ judgment by the 1st to 4th defendants through the 5th to 8th defendants, with the purpose of chasing the claimants out of their respective parcels of land and annexed and fenced the annexed land, is unconstitutional, illegal and unlawful.

4. AN ORDER OF THE HONOURABLE COURT directing the defendants to immediately vacate the claimants parcels of land as described in their respective survey plans and restore all the properties the defendants destroyed.

5. N100,000,000.00 damages in favour of the claimants and against the Defendants, jointly and severally for the malicious destruction/ demolition of the claimant’s houses, churches, factories and industries causing the Claimants to suffer untold hardship, loss of their business, homes and psychological trauma.