Killings Triple In The South-East After IPOB Launched ESN – Is This An Insurgency?

Killings triple in the south-east after IPOB launched ESN — is this an insurgency?

As the world marked Easter, gunmen invaded the Nigerian Correctional Service (NCS) facility and police command headquarters in Owerri, Imo state capital, on Monday. 1,844 inmates were said to have escaped during the attack, and the police pointed an accusing finger at the Indigenous People of Biafra (IPOB).

Few hours after the attack, Nnamdi Kanu, IPOB leader, in a tweet, said nobody deserves to be jailed in Nigeria. However, his position contradicts the Nigerian constitution which recommends jail term for several offences.

“If Miyetti Allah terror herdsmen & other murderous #Fulani groups, including Boko Haram insurgents, can be arrested, freed and rehabilitated by this neo-colonial Fulanised @NGRPresident, then no single soul deserves to be in any prison in Nigeria. If you know you know! #UGM,” he tweeted.

Recently, several attacks have been launched in the south-east region leading to loss of lives and property. No one seems to be safe as high profile citizens, security operatives and other Nigerians in the region have been victims of these attacks.

This has triggered conversations on whether the security outfit has degenerated into a militia leading an insurgency similar to Boko Haram in the northern region.

On December 14, IPOB announced the launch of ESN for the south-east and south-south regions — a replication of Amotekun in the south-west zone.

Emma Powerful, IPOB spokesman, said the objective of the security network is to protect the south-east and south-south from “criminal activity”.

“The sole aim and objective of this newly formed security outfit known as Eastern Security Network is to halt every criminal activity and terrorist attack on Biafraland,” he said.

While the security outfit was reportedly set up to protect lives in the south-east, the region has recorded more criminal activities since the unveiling of the ESN.

THREE MONTHS BEFORE AND AFTER ESN LAUNCH: WHAT DO DATA SAY? 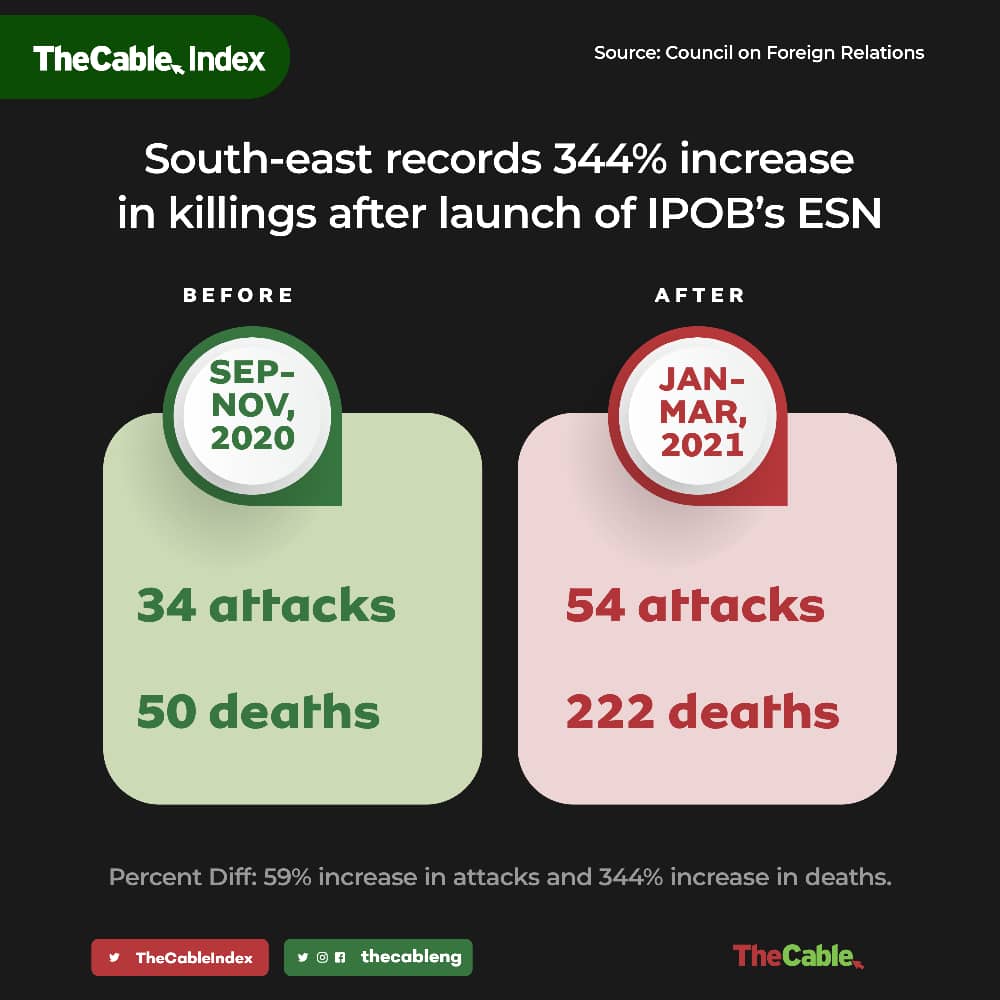 TheCable tracked attacks and deaths in the south-east before and after the launch of ESN. Data on the attacks in the five south-east states — Abia, Anambra, Ebonyi, Enugu, and Imo — were collated for the months of September, October and November, 2020.

Based on reviewed media reports and data from the Council on Foreign Relations, TheCable understands that a total of 34 attacks and 50 deaths were recorded in the three months preceding the launch of ESN.

In December, when the security outfit was launched, there were 13 attacks and 17 deaths recorded in the five states.

Meanwhile, in January, February and March, the first three months of 2021 and the first set of months after ESN was launched, the number of violent attacks surged and death figures spiked.

The south-east region recorded 54 attacks, representing a 59 percent leap, and 222 deaths, which is a 344 percent rise in death rate.

This figures excludes violent incidents across the five states in the month of April such as the attack on the police command headquarters and correctional facility in Imo.

UPSURGE IN ATTACKS AGAINST SECURITY OPERATIVES

A major development since the launch of IPOB’s security outfit is the spike in attacks against police officers.

On March 31, three police officers were killed when gunmen attacked Chukwuma Soludo, former governor of the Central Bank of Nigeria (CBN), in Anambra.

About two weeks ago, three policemen and four naval officers were said to have been killed during separate attacks by gunmen.

On Tuesday, another police station in Imo state was set ablaze by gunmen — this was the second attack on a police facility in two days.

TheCable understands that police officers took to their heels when the station was invaded by the gunmen who also freed detained persons at the police facility.

The attack on the police station came hours after Vice-President Yemi Osinbajo visited the state for an assessment of the damage done during a previous attack.

IPOB: VIOLENCE NOT PART OF OUR CULTURE

Amid allegations levelled against IPOB over the criminal attacks in the south-east, IPOB spokesman said it is not in the group’s “mandate” to perpetrate such crimes.

In a statement, Powerful said the information linking the group or its security outfit to attacks in the region is fallacious.

The group denied the attack against security operatives, saying IPOB, which has been outlawed as a terrorist organisation, was “formed on the principle of peace and we are still in it”.

“IPOB and ESN were not involved in the attack in Owerri Imo State, and the recent attack on Onitsha Owerri road at Ukwuorji junction. It is not our mandate to attack security personnel or prison facilities,” he said.

“Unknown gunmen is a different people which we don’t know them and they not IPOB or ESN security outfit.”

Killings Triple In The South-East After IPOB Launched ESN – Is This An Insurgency? added by on April 8, 2021
View all posts by →