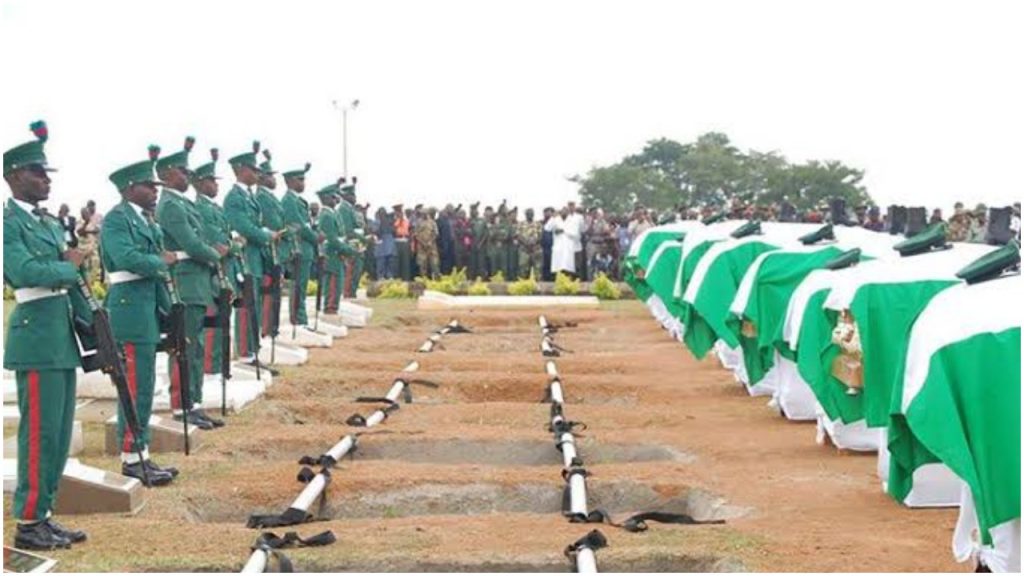 The Nigerian Army on Monday laid to rest, the remains of Captain Adeolu Adedayo and eleven other soldiers killed by bandits in Konshisha Local Government Area of Benue State.

At the different funeral service offered by the Chaplain of Protestant 401 Special Forces Brigade, Major Ibrahim Mavisky, and the Imam of the same Brigade, Captain Aliyu Bashir, the fallen heroes were described as peacemakers as tributes flowed freely.

The general salute was given to the fallen heroes with 21 gunshots and the presentation of military attires and the national flag to the next of kin of the deceased soldiers and officers.

Benue State Governor Samuel Ortom also led a delegation of the Benue State government to the funeral to commiserate with the families, military authority, and the Federal Government.

He condemned the brutal killing, promising to corporate with the military to ensure the arrest and prosecution of those involved in the killing. He also condemned the action of civilians taking up arms against security forces.

The soldiers were killed on April 6, 2021, by bandits while on a routine operational task to maintain peace in the troubled region of Konshisha and Oju Local Government Areas of the state.

The military had reported that its troops came under attack while on a routine operational task in the area.

Nigerian Army Buries Captain, 11 Soldiers Killed By Bandits In Benue added by on April 12, 2021
View all posts by →